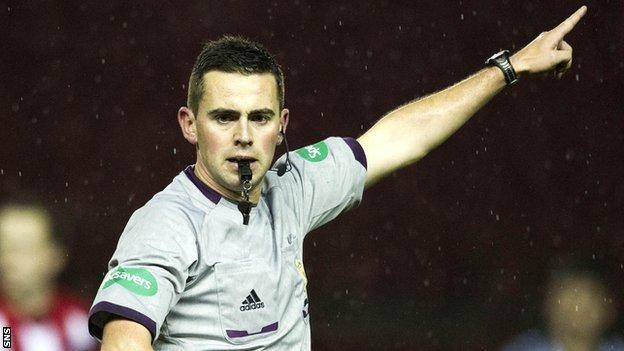 Andrew Dallas is "surprised and disappointed" at claims he invented a story that led to Kilmarnock manager Kenny Shiels being send to the stand.

But, in a statement, Dallas explained that he has referred the matter to the Scottish Football Association.

And the official is also seeking advice from the Scottish Senior Football Referees' Association.

"I am extremely surprised and disappointed by the comments and allegations made by Mr Kenny Shiels yesterday [Friday]," said Dallas.

"In order to focus on my duties as a match official I will make no further comment at this stage."

Separately, the SFA have insisted Shiels was not "totally exonerated" as he had indicated when discussing the incident that took place during the match against St Johnstone. Shiels maintains he was cleared of wrongdoing.

The apparent dispute between Shiels and Dallas came in the wake of Kilmarnock captain Manuel Pascali's sending off against Saints on 24 November.

After Shiels spent the majority of that match watching from the stand, he was asked by SFA compliance officer Vincent Lunny to account for misconduct during that game and also for comments made in the media following his side's defeat by Inverness on 3 November.

Shiels was found guilty of comments that "impinge on the character of a match official".

He was also said to be in breach of rule 203 relating to misconduct during the 2-1 loss to Saints but the judicial panel ruled no further sanction was necessary.

A one-match suspended sentence from June was added to a two-match touchline ban, resulting in an overall three-game term in the stand.

Shiels, who was also handed a further two-match suspended sentence, had been considering an appeal.

Dallas is due to act as fourth official at Dundee United v Inverness on Saturday.