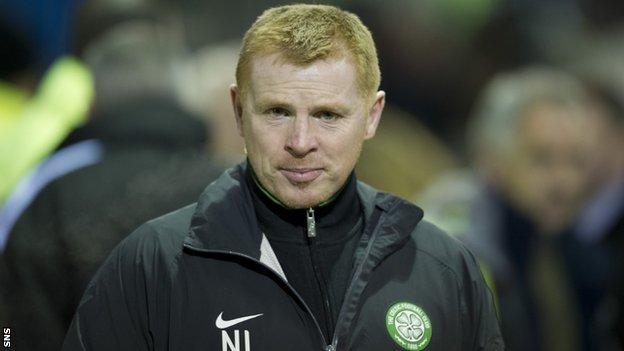 Celtic's Neil Lennon says Scotland's club managers hope to achieve a "compromise" over sanctions handed out to coaches who fall foul of the rules.

Head of the managers' union Alex Smith is to put a proposal to Scottish FA compliance officer Vincent Lunny.

Lennon insists the relationship between managers and officials is "pretty good" but thinks that sanctions are often "too severe".

"There has to be more transparency between officials and managers. At the end of the day, we're the ones that get punished. And at times we feel wrongly punished. We're the ones who are vilified in the press.

"There are times we say things in the heat of the moment that we don't mean.

"To be fair, with 90% of the incidents I've been involved in over the years, the officials have been brilliant and called it spot on - a lot of common sense.

"Some of them take it too far but I think the relationship between managers and referees in the main is pretty good."

Lennon, Lomas and Shiels this week attended a meeting with Lunny, along with Dunfermline boss Jim Jefferies, a summit the Celtic boss described as "productive".

"I think the sanctions for managers are far too severe," added Lennon, who feels the deterrent of a potential ban has motivated him to remain calm on the touchline.

"I think Steve Lomas is looking at eight games. That's a quarter of the season he can't do his job properly for what?

"I know it's an accumulation of things but I still think that that one incident should not accumulate to the fact where he loses a quarter of the season where he can't do his job properly.

"Alex Smith's going to put a proposal to Vincent and hopefully we come to some sort of compromise."