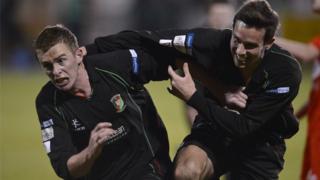 Glentoran come from two goals down to beat nine-man Portadown at Shamrock Park.

Darren Murray scored twice in the first half for Portadown but was sent-off just before half-time, joining defender Gary Breen who was red carded earlier in the game.

Andy Waterworth pulled one back before half-time and the Glens scored in the second half through Mark Clarke, a Jay Magee penalty and Carl McCombe.