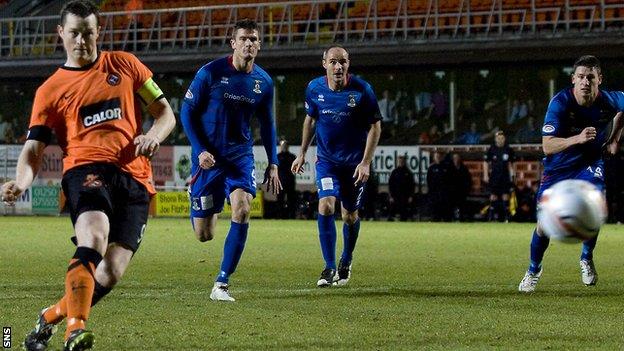 Dundee United manager Peter Houston was upset to squander a convincing early lead in an incredible 4-4 draw at home to Inverness Caley Thistle.

"I'm very frustrated if I'm being honest - we're 3-0 up after eight or nine minutes and we should be seeing games off at home," he said.

"We created six or seven chances in that first half and the game should have been out of sight.

"And what happens is you give them two goals and they're right back in it."

United profited from slack defending to race into a 3-0 lead through Josh Meeking's early own goal and strikes from Jon Daly and Rudi Skacel.

"Two corners in the first-half have given them the impetus, although the second one was a foul on Johnny Russell," Houston complained.

"I didn't think the referee recognised foul play as much as he should have today."

Play raged from end-to-end throughout, with both goalkeepers kept busy.

"I'd be concerned if we were at home and not creating chances," added Houston. "We scored four and we should be winning.

"I think we went 3-0 up on Aberdeen a couple of seasons and they came right back into the game as well.

"It's maybe great for the punters but for me and [Inverness manager] Terry Butcher, it's poor defending.

"The players are as frustrated as I am. They are really angry with themselves, they are angry with each other.

"Words were said and we are disappointed. When Dundee United score four goals at home there is no way we shouldn't be taking three points."