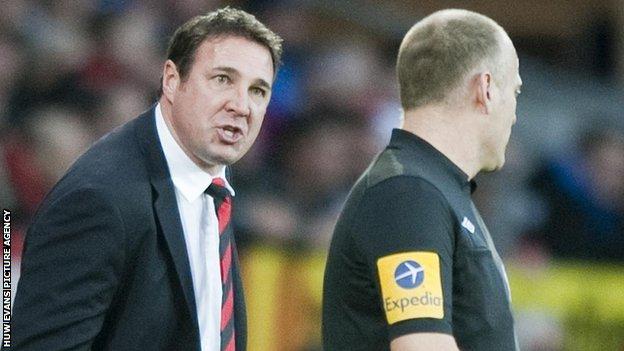 Michael Bostwick and Dwight Gayle scored in either half to put an end to Cardiff's perfect 10-game home run.

Substitute Rudy Gestede scored a late consolation, but Mackay said Cardiff wasted a number of chances against the Championship's bottom side.

"Where it counted, we weren't clinical enough," said Mackay.

"We obviously had plenty of chances, but on another day we take them.

"On another day Heidar (Helguson) could have scored five. We had 20 attempts on goal, did everything but score and weren't clinical. That wasn't good enough."

The Bluebirds were up against a Peterborough side which had only picked up one point in their previous eight games.

Victory over Cardiff temporarily lifted Darren Ferguson's side off the bottom before Sheffield Wednesday's evening win at Barnsley while Cardiff remain top after Crystal Palace could only draw at Birmingham.

"I knew we were going to come up against a good manager and a decent team so there wasn't certainly anything taken for granted," Mackay added.

"I expect better, but we have to give credit because the team that we played had a real fighting spirit and played well.

"It's one of those days where I give credit to Peterborough and Darren Ferguson because they played well.

"Darren Ferguson always has a good football team and if they keep playing like that they won't have an issue this season."

The Cardiff manager was angered by the decision which resulted in Peterborough's opening goal on 22 minutes.

Referee David Coote awarded Peterborough a free-kick 25 yards from goal when it appeared Helguson had been fouled by Gabriel Zakuani.

Bostwick scored from the free-kick, following the decision that Mackay described as "unbelievable".

"I thought it was an incredible decision.