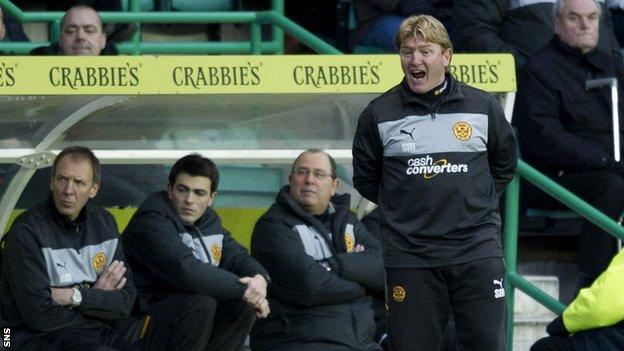 Motherwell manager Stuart McCall said ironing out a few issues at half-time put his side on course for a 3-2 victory at Hibernian.

The Steelmen jumped to second spot in the Scottish Premier League with their sixth away win of the season.

"We said at half-time we've got to go out and play and show what we can really do."

A brace from Hibs' Irish striker Eoin Doyle meant the home side were two to the good at Easter Road with 55 minutes on the clock.

But McCall felt it was only a matter of time before the effects of his interval talk began to kick in.

"I turned to Kenny Black [assistant manager] at 2-0 and said we can still win this," he revealed.

"We did that and got the rewards for it."

Indeed, it was Humphrey's cross that Jamie Murphy tapped in to make it 2-1 and get the comeback underway.

Murphy doubled his tally soon after before substitute Bob McHugh notched a late winner as Hibs buckled under pressure.

Motherwell forward Murphy is now on eight goals for the season.

"That's eight goals he's got and they've all been away from home.

And McCall was pleased his side kicked on from the disappointment of losing to Aberdeen in the Scottish Cup last Tuesday.

"We'll never get over being knocked out the cup the other night, but we can make up for it by having a good run in the league," he said.

"I think that's four away victories [in the league] on the trot."