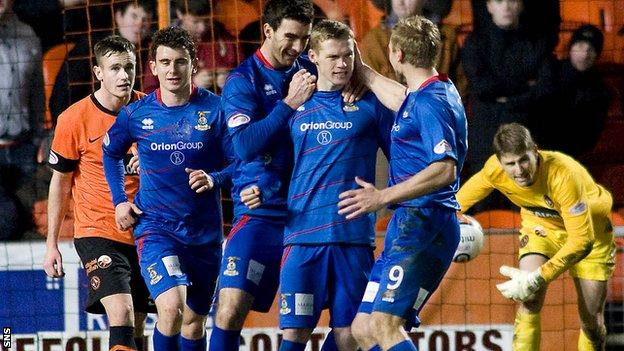 The visitors were 3-0 down after eight minutes but were leading when United skipper Jon Daly netted a late penalty.

"It was an amazing match," Butcher enthused. "If you are looking for an advert for the SPL this was it.

"It was end-to-end stuff with the keepers pulling off some great saves. It could have been 8-8!"

The Inverness defending was woeful in the opening exchanges and Butcher's men were trailing to a Josh Meekings own goal and strikes from Daly and Rudi Skacel before some latecomers had taken their seats.

But Billy McKay snaffled two goals from corners before half-time and completed his hat-trick from the penalty spot in the second-half.

Gary Warren headed the Highlanders in front on 86 minutes but Daly converted a stoppage-time spot-kick to level a pulsating match.

"We're disappointed not to have won the match," Butcher explained.

"If you'd said that eight minutes in it was going to be a draw, I'd have snapped your hand off.

"It was a rollercoaster ride of match. But a draw is a great result for us. To come back from 3-0 down and take the lead, then have that snatched away. Well, there you go.

"The two teams were slugging it out and having a real go at each other. If it was boxing match, both teams would have been counted out.

"You have to remember these boys played 90 minutes against our local rivals [Ross County] in a cup tie on Tuesday. They have got some guts and character.

"They can play as well and when you have someone like Billy up front he is always a threat.

"The spirit in the team is just immense."

Inverness are on a run of only one defeat in 13 games and sit third in the Scottish Premier League.

And the in-form Highlanders will enjoy their Christmas party after such a thrilling encounter.

"The players are going to Newcastle for a couple of nights out," revealed Butcher.

"I thought at seven minutes past three that was going to be cancelled.

"Impossible is not a fact, it's just an opinion and for my boys it certainly wasn't."