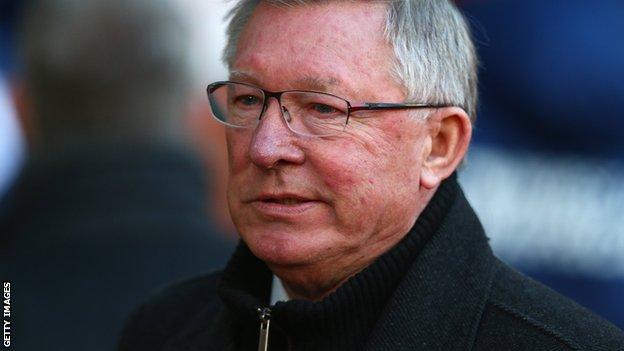 Sir Alex Ferguson says his Manchester United players were fortunate to escape being embarrassed by Sunderland.

United restored their six-point lead at the top of the table after goals by Robin van Persie, Tom Cleverley and Wayne Rooney earned a 3-1 win.

But Ferguson was unimpressed that United almost allowed the struggling visitors back into the match.

"Sunderland could have had two or three towards the end; it could have been embarrassing," said the United manager.

The Black Cats suffered a third defeat in four Premier League games but kept fighting, pulling a goal back through substitute Fraizer Campbell and enjoying the best of the final 20 minutes, much to Ferguson's frustration.

It is now four clean sheets in 25 league and cup games for Manchester United after former Old Trafford trainee Fraizer Campbell scored for Sunderland. That is despite Nemanja Vidic making a return from a serious knee injury after three months out

"For an hour we were fantastic," Ferguson added.

"I don't know if we relaxed or Sunderland picked up the baton 20 minutes from time.

"They could have scored two or three goals. But Sunderland deserved a goal because they worked so hard for it. They had a lot of energy in the second half. They have a youngish team and kept going."

Van Persie and Rooney were at the heart of United's best moments, combining on numerous occasions to shred the Sunderland defence. Both strikers scored and Ferguson admitted he was delighted by their interplay.

"It was marvellous at times," Ferguson said.

"I don't want to pick out one player but Robin's movement was fantastic and always kept them on the back foot. Wayne could have scored four goals today; he hit the bar and missed two or three in the first half. But he has got his goal and that is important for us."

Cleverley also impressed on the back of a dogged display in last week's Manchester derby - and Ferguson admitted he had been unable to leave the England international midfielder out of his side. "Tom has been progressing well," he said.

"It was a superb goal, a fantastic finish. That epitomised the way we were playing at that point. I have no complaints about that hour it was wonderful to watch. Tom played very well in the derby and he deserves his position in midfield.

"We have a lot of options in midfield: Anderson, Darren Fletcher, Paul Scholes and Ryan Giggs - people keep saying we are weak in midfield but these are fantastic players.

"Sometimes it gives me a little bit of a problem picking the right two."

Nemanja Vidic made a return to the side, following three months out with a knee injury. "I'm delighted Vidic is a back - he's a warrior," Ferguson added.

"It will take him time to get full match fitness but it is a start. Rafael had a tight hamstring but he should be OK next week.

"Hopefully by the time new year is over we'll still be top of the league."