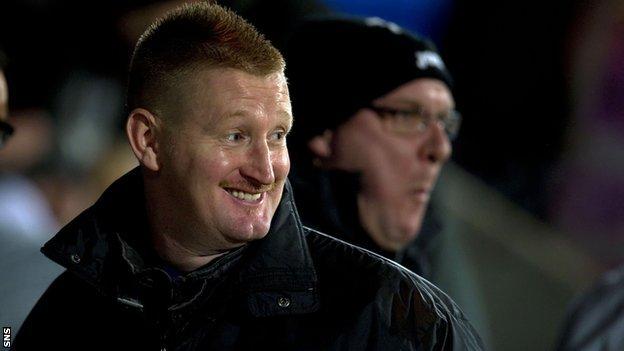 Saints were minus three first-choice defenders through suspension.

"I must thank David McCracken for playing only four weeks after a triple cheekbone fracture, which was plated and screwed back together," said Lomas.

"And Tam Scobbie was playing out of position. The two goals conceded were not great, but they did well."

McCracken had not played since picking up his injury against Celtic on 11 November.

"I asked Dave if he wanted to play and, credit to the boy, many would not have wanted to play against someone like John Sutton in their first game back from such an injury," said his manager.

Sutton's markers were absent as he headed Hearts into an early lead, but Rowan Vine replied immediately after for the home side.

And, although Andrew Driver restored the lead just before the break, Steven MacLean gave Saints a deserved share of the points.

"I have to give my boys credit for coming back twice," said Lomas.

"You have to give Hearts credit too, but not taking our chances was the difference between a point and three today."

Lomas dismissed an altercation between Patrick Cregg and Hearts midfielder Darren Barr, that ended with the latter receiving a yellow card for retaliation and an injury that led to his substitution, as "much to-do about nothing".

The Saints manager is serving an eight-game touchline ban and admitted he is not enjoying his time in the stands.

"It's not great, but you just have to get on with it, although the game does look much easier from up there!" he admitted.

Meanwhile, the chances of St Johnstone's much-postponed Scottish Cup fourth-round tie against Cowdenbeath going ahead on Monday appear to be increasing.

The First Division side's Central Park pitch will be inspected on Sunday afternoon, but Lomas revealed that they are "slightly more optimistic" that the thaw will allow the game to be played.