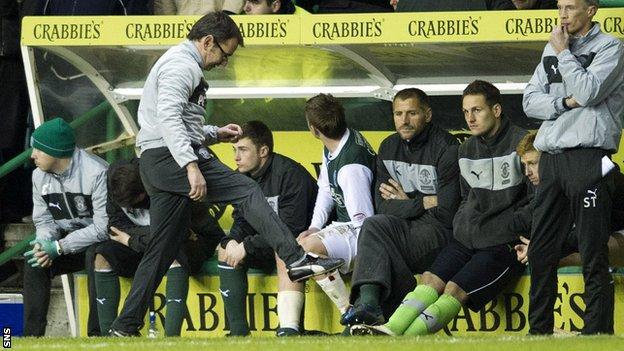 Hibernian manager Pat Fenlon admits his side's recent slump in the Scottish Premier League might force him to shake up his starting XI.

Saturday's defeat to Motherwell means the Easter Road side have lost four of their last five league games.

"So maybe there's one or two [players] coming back that are looking to play so we might have to change the team around a little bit."

Irish striker Eoin Doyle scored a double to give Hibs a 2-0 lead but Motherwell fought back to win as the home side buckled under late pressure.

"[I'm] disgusted. I think we thought we'd won the game when we scored the second goal," said Fenlon.

"We never got hold of the ball after that and got deeper and deeper into our own half.

"You don't get anything for getting results at half-time, it's all about seeing games out."

Some supporters at Easter Road were surprised to see Fenlon withdraw top-scorer Leigh Griffiths and Doyle in the second half .

The forwards have scored 20 goals between them this season.

"We didn't take them off together," said Fenlon, defending his substitutions.

"We were getting over-run and we took one off to try and get hold of the ball in the middle of the park and we didn't do that."

Another blow for Fenlon was the dismissal of captain James McPake for two bookable offences.

The defender had only just returned to the side from injury.

"The first one [booking] was a bad decision - it was a foul alright but never a yellow card," said Fenlon.

"When you lose football matches you're always disappointed but, in fairness to the players, we've been excellent this year and we just need to get going again."