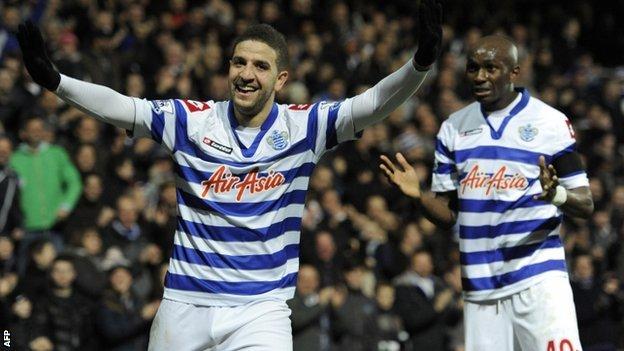 The midfielder, 23, scored twice on Saturday against Fulham to earn Rangers their first Premier League win of the season and lift them from bottom spot.

"He's got ability like not many people you've ever seen in your life," said Redknapp. "He's like Di Canio, who I thought was a fantastic player, one of the all-time greats at West Ham.

Taarabt opened the scoring with a deflected shot from 25 yards and then added a sensational second, nonchalantly curling the ball into the net following a mazy run from midfield.

The Moroccan has scored 25 goals in 79 starts for QPR since signing permanently in August 2010 and was the standout performer when the club won promotion from the Championship in 2011, scoring 19 goals as they won the title.

"It was one of the all-time great performances, I felt," Redknapp said.

"I sold him when I was at Tottenham and he knows he was not a player I wanted to sell.

"When he used to come back and see his mates at Tottenham I used to say: "You are making me look a fool Adel, you are worth £20m now and I sold you too cheap'.

"He's grown up a bit now, he's better than he was. He was a complete fruitcake at Tottenham."

Redknapp's side managed to hold on and, ahead of Monday's game between Reading and Arsenal, moved off the bottom of the table for the first time since 10 November.

"It is going to be tough [to avoid relegation] but I cannot ask any more [of the players] than they did today," Redknapp told BBC Sport.