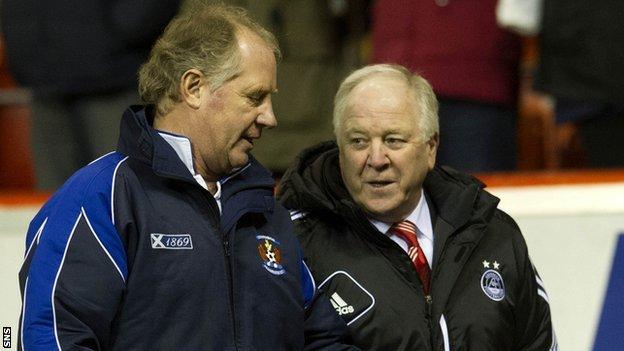 Aberdeen manager Craig Brown is annoyed his team waited until they were trailing before upping their game.

The Dons lost 2-0 at home to Kilmarnock, meaning they have still only won twice at Pittodrie in the league this season.

"I keep saying to them, 'why do we wait until adversity strikes until we fight back so bravely?'"

The game changed on the stroke of half-time when Aberdeen goalkeeper Jamie Langfield was red-carded for bringing down Kilmarnock's Borja Perez in the box.

Liam Kelly stepped up to convert the penalty and added a second late on.

"The home form's been problematic - there's no doubt about that," said Brown.

"With seven top-team players out, it's a very difficult assignment to play midweek, raise your game to the level we did at Motherwell and maintain that with a team which is not as experienced as it could be if everyone were fit."

However, the Dons boss is sure better form is just around the corner.

"We're only a hair's breadth away from getting onto a good run," he added.

"I'm optimistic that when we get all our guys fit, and hopefully we'll get some points before then, we can go on an unbeaten run."