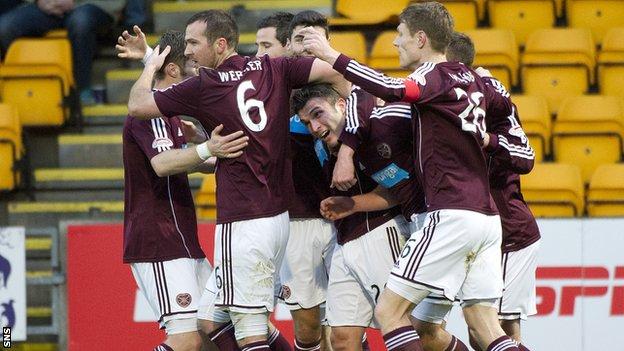 Hearts manager John McGlynn thanked Andy Webster for holding his side together against St Johnstone after Darren Barr went off with an injury.

Barr took a knock on the shin during the 2-2 draw just before a half-time break during which he was replaced.

That limited McGlynn's options from the bench, with Webster not expected to last 90 minutes because of a virus.

"It was terrific for him to play well in the circumstances. He is a massive player for us," said McGlynn.

"Having to bring Darren Barr off at half-time was a bit of a blow.

"He has been struck on the shin and is wearing a protective boot at the moment, but it's too early to say the extent of the injury."

Barr had been booked for his retaliation on Patrick Cregg following the St Johnstone midfielder's tackle.

However, McGlynn dismissed it simply as a "50-50" challenge.

Although Hearts were twice ahead, through John Sutton and Andrew Driver, McGlynn was happy to leave Perth with a draw.

"I've got to thank Jamie MacDonald for two or three good saves," he said.

"It was a well-earned, hard-earned point.

"It was a great start for us and it was good to see John Sutton getting a goal, but we just couldn't stay ahead long enough.

"We had a chance to go 3-1 up through Gordon Smith, but we have not had a great record here, so a point is not the worst result."

McGlynn confirmed that the Hearts players and backroom staff had been paid their December wages on Friday and that they were now up-to-date with payments.

Late payments had resulted in the Scottish Premier League imposing a signing ban on the Edinburgh club.

"The players have been tremendous and there's been no mumping and moaning," added McGlynn.

"However, it's good that the wages have been paid in time for Christmas as that's an important time."