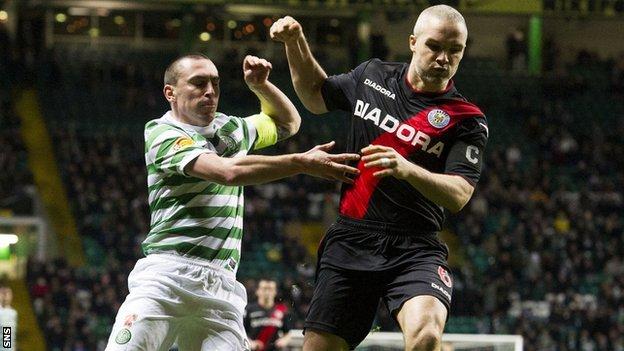 St Mirren captain Jim Goodwin was disappointed his side were not able to offer more in attack in the 2-0 defeat by Celtic.

Goals by Victor Wanyama and Gary Hooper secured all three points for Celtic.

"They beat us by five the last time and that was in the back of our minds in the build-up," said Goodwin.

I think Celtic deserved their victory

"We obviously didn't want another embarrassment. But the fact that we lost and didn't offer anything to the game is very disappointing."

The Paisley side tried to frustrate the reigning champions, who led 1-0 for a long spell before Hooper's late clincher.

"We know it is dull and boring to watch but other teams have been successful playing a 4-5-1 and being defensive, and we tried to adopt it and it was two set-pieces that done us," explained Goodwin.

"It is not really our style of football, we like to get it down and play and attack and we didn't do that today.

"But Celtic are a huge force and we tried to do to them what they did to Barcelona but we didn't get the right result.

"If we had come away with a 0-0, I know it wouldn't have been great entertainment but it would have been a job well done."

Buddies manager Danny Lennon added: "I think Celtic deserved their victory, they had the ball in the net twice.

"We tried to come here, not for damage limitation, but we tried to keep the game as close as we could and I thought until the 83rd minute or whenever the goal went in, we certainly did keep it on a knife edge."