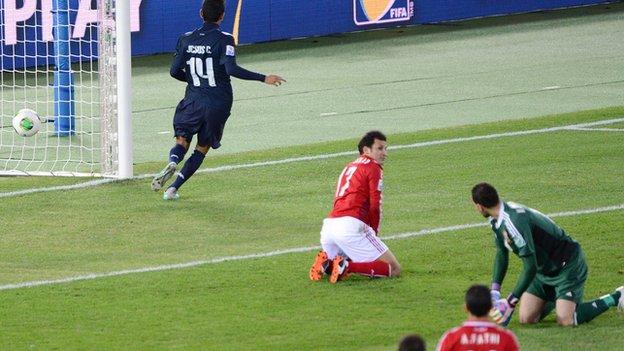 African Champions League winners Al Ahly were forced to settle for fourth spot at the Fifa Club World Cup after they lost 2-0 in Yokohama to Mexican side Monterrey.

As with their narrow semi-final defeat to Corinthians, the Egyptian side were again unable to make the most of their gilt-edged chances.

Jesus Corona pounced on the defensive chaos (pictured above) and was left with the easiest of tap-ins.

Mohamed Aboutrika started his first match of the Club World Cup but it was Emad Moteab who had Ahly's best chance. His powerful header, after half an hour, struck the post.

Aboutrika went close just after the break with a driven shot, but Monterrey goalkeeper Jonathan Orozco was alert to the danger.

Abdalla Said and substitute Elsayed Hamdi then forced a double save from Orozco on 65 minutes.

Within a minute, Monterrey had netted a decisive second. Cesar Delgado delivered the killer blow, with a chip over the advancing Abou Elseoud.

Still Ahly pushed forward, with Aboutrika and Mohamed Naguib going close but the African champions were unable to repeat their third place of 2006.

"I am very much disappointed. We wanted to be third," said Al Ahly coach Hossam El-Badry.

"We had many opportunities which we missed. If those opportunities had been taken then I think we would have been able to reverse the score."

Ahly board member, Khaled Mortagy told the BBC: ""Everybody is very astonished and surprised, wondering how Al Ahly can perform, despite the stoppage of football and the fluid political situation in Egypt.

"So, although we lost a medal I think we have won the recognition and respect of the world."

Football in Egypt has been suspended since more than 70 fans died during rioting following a match between Al Masry and Al Ahly in Port Said last February.