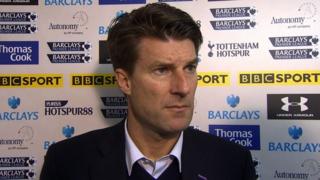 Swansea boss Michael Laudrup feels his side played well against Tottenham, but were a bit lacking in the final third of the pitch after they fell to a 1-0 defeat at White Hart Lane.

Jan Vertonghen turned in Kyle Walker's free-kick to score the only goal on 75 minutes and Laudrup admits he was disappointed in the manner with which Swansea conceded.