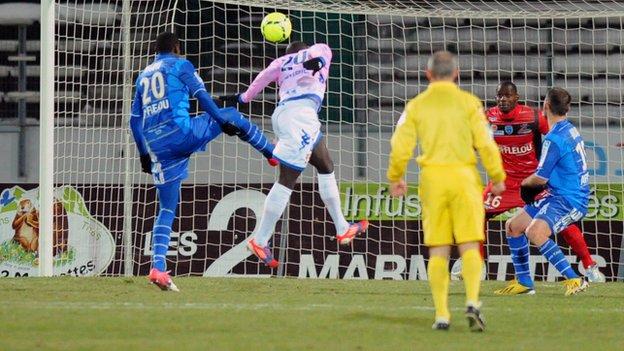 No fewer than 31 Africans - the majority of whom are Nigerians - are currently plying their trade in the revamped Indian professional league. The I-League has attracted players and coaches from Japan, Australia, South America and Britain in an attempt to raise the profile of the game in one of the weakest football nations in the world.

Over the weekend, a fascinating 12-goal thriller ended 8-4 in favour of Churchill Brothers who defeated Sporting Goa. Gabon striker Henry Antchouet scored twice in the game for the winners, while Nigeria's Ogba Kalu scored one for Goa.

Half the goals were produced when Pune thrashed league leaders Dempo 5-1 with South Sudan striker James Joseph Saeed Moga scoring twice and one for Ivorian Pierre Djidjia Douhou for the winners.

The I-League's top scorer is Nigerian striker Ranty Martins who added his 14th goal after accounting for the only goal in the game for Prayag United in their 1-0 win over East Bengal.

Another Nigerian Nbusiyu Opara also accounted for the only goal of the game to help his side Mumbai edge out Sikkim.

Yannick Sagbo-Latte scored the opening goal of the game for Evian, but his side lost a two-goal lead to lose 3-2 at Nice. The Ivory Coast striker has scored twice in 17 appearances for Evian.

League holders Montpellier won their third game in a row after thrashing Bastia 4-0. Morocco striker Younes Belhanda was among the scorers, accounting for the third goal on the hour mark to take his tally to six finishes.

Fellow Moroccan Kamel Chafni equalised in the 63rd minute for Brest four minutes after his side conceded to Sochaux. It was Chafni's first goal of Ligue 1 this season as Brest took all three points after winning 2-1.

Despite conceding twice dramatically in the 90th minute, Troyes held their nerves to win only their second game of the season after defeating Ajaccio 3-2. Tunisia midfielder Fabien Camus had guaranteed the points for Troyes in added time of the first-half after scoring his side's third goal.

Ghana midfielder Andre Ayew missed a penalty before half-time for Marseille, but the French giants still clinched the full points thanks to a lone goal win over Toulouse. Senegal defender Cheikh M'bengue of Toulouse was sent-off in the 28th minute as his side played the entire second-half with nine men.

Burkina Faso striker Jonathan Pitroipa sealed victory for Rennes in the 71st minute as they dismissed Valenciennes 2-0. Another Burkinabe Alain Traore reached his six goal mark after finding the target for Lorient who beat Saint Etienne 2-0.

Gabon midfielder Andre Biyogo Poko was sent-off after receiving his second booking in added time of the first-half bust his side Bordeaux still held on to draw 1-1 at bottom placed Nancy.

Nigeria striker Imoh Ezekiel notched home his 10th goal after giving Standard Liege the lead in their 2-0 win over Mechelen.

Ghana midfielder Abraham Kudemor scored the only goal of the game as his side Charleroi defeated Beerschot.

Tunisia's Hamdi Harbaoui fired home his fifth goal of the season as he helped his side Lokeren to draw 2-2 at home with Gent.

After the Tunisia defender Karim Saidi had missed a penalty, it was the Morocco midfielder Rachid Bourabia who made amends just after the break in the 46th minute to give Lierse the lead in the 1-1 draw with Cercle Bruges.

Goal number five for Senegal striker Mbaye Leye came from the penalty spot as he helped his side Zulte-Waregem to a 3-2 victory over Genk.

Elsewhere, Democratic Republic of Congo striker Dieudonne Mbokani also scored one of his goals from the penalty spot as he found the back of the net twice to give Anderlecht a 2-1 win over Leuven. The Gambia striker Ebrahima Sawaneh had equalised for Leuven in the 44th minute. Sawaneh is the second highest top scorer with 15 goals, while Mbokani follows close behind with one goal less than the Gambian.

After missing a penalty in the 70th minute Jacob Mulenga consoled Utrecht fans by taking the game beyond reach of Heerenveen who were beaten 3-1. The Zambia striker scored in the 89th minute to increase his account to seven goals.

Ivory Coast striker Wilfried Bony smashed home his 16th of the season to remain top scorer after contributing a goal to his side Vitesse Arnhem's 2-2 home draw with Waalwijk.

Equatorial Guinea striker Javier Balboa was among the scorers for Beira Mar in their 3-1 win over Rio Ave.

Senegal striker Khalidou Yero put his side Gil Vicente ahead after six minutes but his side surrendered a two-goal lead to draw 2-2 away at Olhanense.

Salim Cisse came on as a substitute at the start of the second-half to equalise in the third minute of added time for Academica to force a 2-2 draw away at Moreirense. The Guinea striker has notched home four goals in the Primeira Liga.

Also with four goals is the Guinea Bissau striker Cicero Semedo who scored both goals for Pacos de Ferreira who beat Vitoria Guimaraes 2-1.

The top African scorer Mame Diouf signed out for the winter break with yet another goal at the weekend by equalising for Hannover who were 2-1 losers at Fortuna Dusseldorf. The Senegal striker scored in the 69th minute to take his tally to six goals after the half-way stage of the Bundesliga season.

Rafik Djebbour increased his tally as the top scorer after scoring the winner for league leaders Olympiakos in the 82nd minute to help his side come from behind to beat Panionios 2-1. The Algeria striker has taken his tally to a dozen goals.

Kenya midfielder Victor Wanyama continued his fine form for Celtic, scoring his fifth goal of the season for the league leaders in their 2-0 triumph over St Mirren.

Pierre Webo scored the winning goal for Istanbul BB in the 57th minute as his side fought back from a goal down to beat Trabzonspor 2-1. The Cameroon striker has scored eight goals.