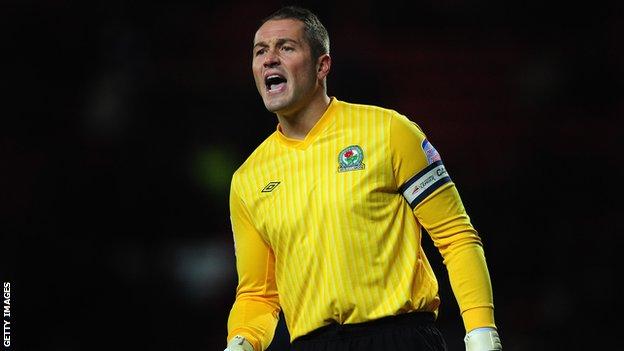 Manager Henning Berg insists Paul Robinson does have a future at Blackburn, despite dropping the keeper for Saturday's 2-0 defeat at Blackpool.

Jake Kean was handed his third start for Rovers at Bloomfield Road, but could not prevent a fifth loss in nine games since the Norwegian took charge.

"We need all of our goalkeepers," Berg told BBC Radio Lancashire.

"Paul's been playing every game until this game. Jake played this game, and we'll see who plays the next game."

Robinson, 33, joined Blackburn from Tottenham in 2008 and has started 172 games for Rovers.

"I would be surprised if he wasn't disappointed," added Berg. "That's natural. He wants to play and he wants to do the best he can do. Of course he was disappointed, but that's football.

"It was purely a football decision. It was a tight decision and a difficult one to make.

"Jake has not played much but I've seen him in training and, with the results we've had lately, I felt that we should give him a chance.

"In the end, I thought he had a decent game. He couldn't do much about the goals they scored, and apart from that, he didn't have much to do."

Last month, Berg dismissed reports that he was planning to bring veteran Spurs keeper Brad Friedel back to Ewood Park.

There was more frustration from the visiting supporters during Blackburn's defeat by Lancashire neighbours Blackpool, as the club's poor run continued.

Former Rovers defender Berg said: "The biggest problem we have is results.

"We've not been dominated by any team. We've been close but the scorelines have not been reflecting that.