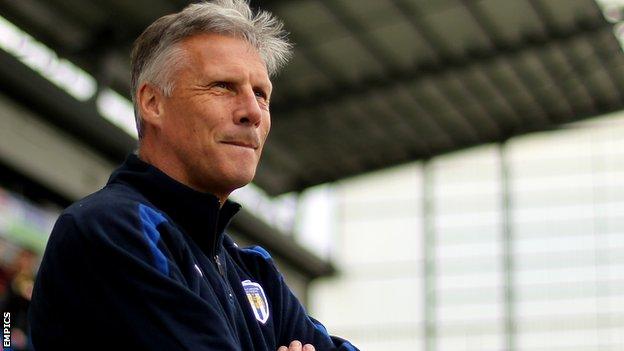 Bristol Rovers have appointed John Ward as their new manager until the end of the season.

The 61-year-old was poised to become director of football at Plymouth Argyle, but he has instead rejoined the Pirates for a second spell as boss.

"I've got an affinity here that once I was asked to come and help I said yes," Ward told BBC Radio Bristol.

Ward, who was sacked by Colchester in September, replaces Mark McGhee, who departed after Saturday's loss at York.

"I had a train ticket down the line to speak to Plymouth, who I had to speak to pretty quickly, but once I discussed this with my family and wife, this was the place I had to be," he added.

"We've got to make sure there's a spirit within this football club. The supporters have had their problems here and there, but I'm asking them and the players to put them to one side.

"We've got 24 matches to try to make sure that Bristol Rovers is still a Football League club at the end of April."

Former Lincoln striker Ward has also spent time in charge of York City, Bristol City, Cheltenham and Carlisle United, and earlier in his career had been assistant to Graham Taylor at both Watford and Aston Villa.

His previous stint in charge of Rovers was between 1993 and 1996 when they played in what is now League One and Ward managed to guide them to a top-half finish every year in charge, even achieving a play-off place in 1995.

Rovers chairman Nick Higgs told BBC Radio Bristol: "With the January transfer window looming we needed to have somebody in place with time to assess the current playing staff.

"It is vitally important that we bring someone to manage the club that has Rovers connections and understands Bristol Rovers' value and John is the perfect candidate for this role.

"Hopefully under John's guidance we will return the pride to the club which has clearly been lacking on the pitch for the past few years."

Prior to McGhee's spell in charge, Dave Penney spent less than two months in the role and Paul Buckle was dismissed within eight months of being appointed.

Ward was set to be unveiled by Plymouth this week until they released a statement saying that the person they had offered the job to "is now looking at another appointment, so we have decided to look elsewhere".

The Pirates currently sit 23rd in League Two, one point from safety.