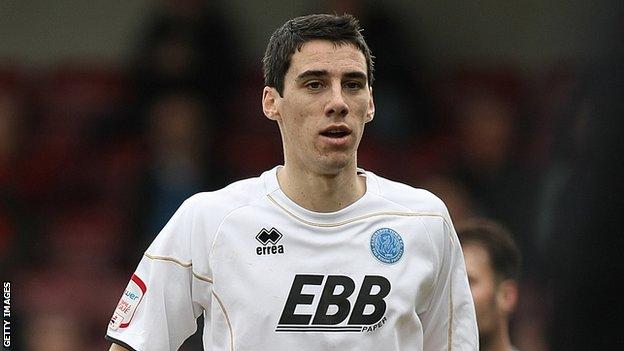 Aldershot midfielder Peter Vincenti believes the side are starting to fulfil their potential in League Two.

The Shots have moved three points clear of the relegation zone after one defeat in their last five games.

The 26-year-old told BBC Surrey: "We have been massively disappointed with ourselves. There was so much optimism going into this campaign.

"We're disappointed with where we find ourselves but I think gradually we are putting it right."

We almost had to remember that we can win at home. I felt there was a real focus to put it right and we showed character

He added: "It has been a slow process. We have got to improve again and we will."

The Shots secured only their second home league win of the season on Saturday after beating Rochdale 4-2.

It was their first league win at the EBB Stadium since September and the Jersey-born player thinks the side are beginning to turn the corner at home.

"The home form has been disappointing this season and we know that," Vincenti continued.

"We really can't put our finger on why.

"We go away from home and are so confident at places that we feel like we're not going to get beaten. Game-by-game it has been improving.

"I felt there was a real focus from the lads to put it right and we showed character.

"We almost had to remember that we can win at home. It's been that sort of run of games for us.

"We scored four, defended well at times and hopefully the fans will go away thinking that the team are improving."