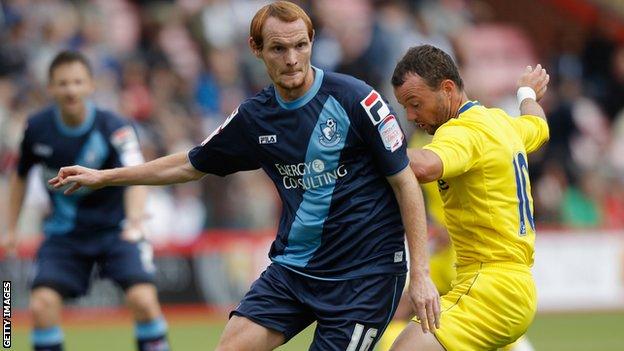 Bournemouth will be without midfielder Shaun MacDonald for at least two months after he suffered an ankle injury in his side's 1-0 win against Colchester.

MacDonald, 24, has been a key player for the Cherries, who have not been beaten in their last 13 matches.

"But either way it looks like it will be a minimum of a couple of months."

Howe added: "We've said how pivotal he is and what a great job he has done since I've come in.

"He is an unsung hero, he makes us tick and we missed him."

Howe dropped down a division in October when he left Championship side Burnley to return to Bournemouth, who he had previously managed from January 2009 to January 2011.

When I came, our first thought was to move away from the bottom four

When he returned to the Cherries, they were in the bottom four of League One but eight wins and three draws have taken them to within two points of the League One play-offs, while Howe has also guided Bournemouth into the third round of the FA Cup.

"We've been very surprised at the progress and really pleased with how quickly the lads have adapted to our ideas," said Howe.

"When I came, our first thought was to move away from the bottom four.

"Our players' mentality has been the deciding factor and they showed they wanted the win against Colchester.

"People were throwing their bodies in front of the ball and it's all about attitude.

"If you have players fighting for each other and willing to go that extra mile then you will go far, and we have that."