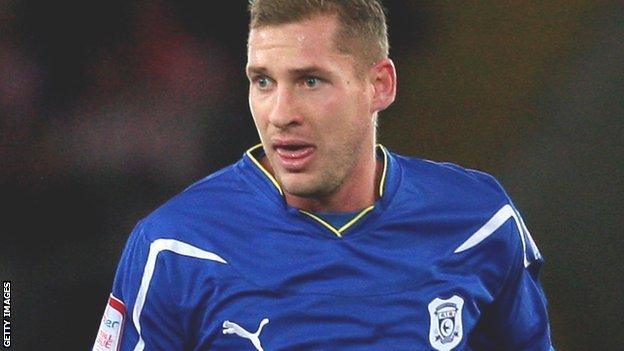 Portsmouth defender Gabor Gyepes has admitted he may have to leave the struggling League One club when his contract expires in January.

Gyepes, 31, has played 18 times this season and insists he is happy at Fratton Park but could still move on.

"I would be really happy if I stayed here but my priority is to look after my family and give them as much as possible," he told BBC Radio Solent.

"There are 18 players' contracts that run out in January, even mine."

The former Cardiff, Northampton and Wolves player added: "If I find something else, some better option, I will have to take it.

"I'm really happy here, it's a really good football club and I'm happy playing for it but I'm 31 and have to do as much as possible."

Portsmouth dropped into the relegation zone on Saturday when they drew 0-0 at home against Preston, the 10th successive game Pompey have failed to win.

It's difficult and it's been like this for a long time, a year, maybe more

The club have been in administration since February and face a 10-point deduction when they come out of it.

Gyepes admitted the players do worry about the club's off-field problems.

He said: "It's hard and it does affect you. We're on one-month contracts but it's up to us and we have to just go and train and prepare for the next game and get a result.

"It's difficult and it's been like this for a long time, a year, maybe more, and no-one knows what will happen in January.

"You have to try to stay away from this kind of stuff and concentrate on our jobs, which is playing football."