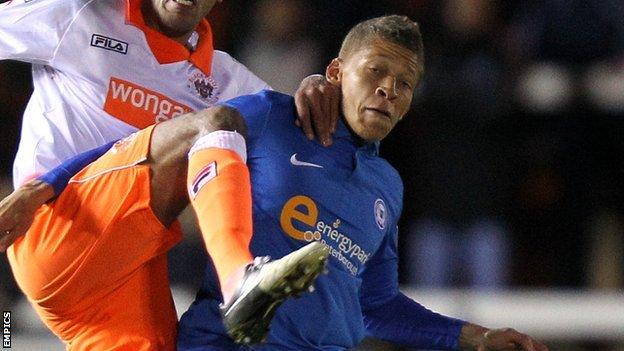 And the 22-year-old striker's goal in took his tally to four in five games.

"At this rate, I'll struggle to keep hold of him," Ferguson told BBC Radio Cambridgeshire.

But he added: "It would be a brave man to try and take him off us now. I'm sure he'll stay with us.

"He listens. He picks up things quickly, which is always a sign of a good player. He's going to be a really good player the boy.

"I think him and Lee Tomlin are looking a partnership, they were a threat all day. The only slight criticism I'd have is they should have finished Cardiff off earlier."

Gayle joined the Daggers in the summer of 2011 after scoring 57 goals for Essex Senior League side Stansted in the 2010-11 campaign.

He spent last season on loan at Blue Square Bet North club Bishop's Stortford, where he found the net 42 times, and subsequently signed a three-year deal at Victoria Road.

Posh chairman Darragh MacAnthony has moved to calm fears Gayle could be poached by another club in January.

"All in hand & is between us & D & R who we always do great business with year after year," he said on Twitter.