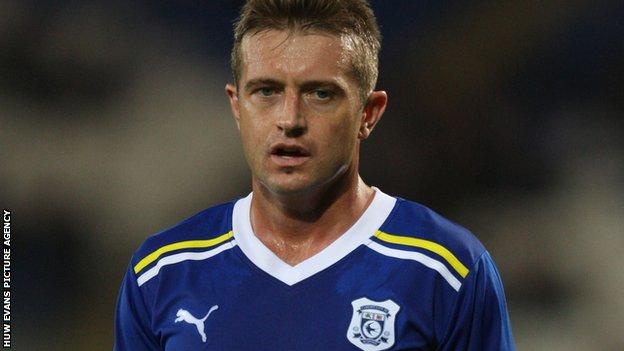 Stephen McPhail wants to remain a part of Cardiff City's future, even if he has to call time on his playing career.

The Republic of Ireland midfielder's career has been blighted by illness.

The 33-year-old was first diagnosed with stage one malt lymphoma in November 2009 and then the autoimmune disease Sjogren's Syndrome last season.

"I'll keep playing as long as I can but if I feel it's the end of the road I'll hang my boots up and hopefully have some part in the club," McPhail said.

"I honestly don't know [if I can play on], I've got six months left on my contract.

"I've spoken with the manager [Malky Mackay] about the future and hopefully in some sense I'm going to try and stay involved with the club.

"If not playing, if I decide that my body can't take it - I'll know in the back end of the season how my body is feeling and I'll make a decision."

McPhail, who moved to Cardiff in 2006 from Barnsley on a free transfer, is out of contract in the summer but has settled his young family in the Welsh capital and has been taken to the hearts of the Bluebirds fans.

"I love this city... I love living here, I love the club," added McPhail, who was speaking at a pre-Christmas visit by Cardiff City players to the children's wards at University Hospital of Wales, Cardiff, where he has received much of his own treatment.

"The club has been unbelievable for me, helped me through so much, the fans have been outstanding."

Cardiff dropped their first points at home this season last weekend after a surprise 2-1 loss to bottom club Peterborough.

Mackay's side remain top of the Championship although they face a tricky trip to fifth-placed Leicester City on Saturday.