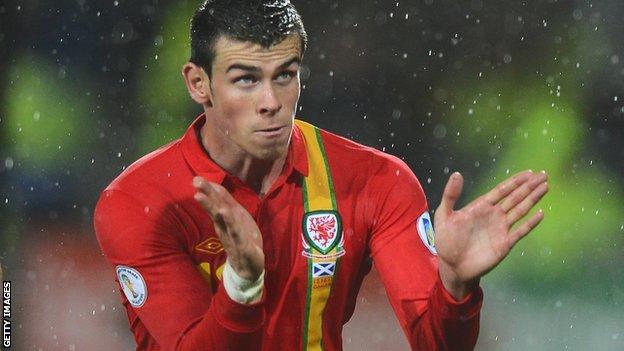 The left-sided attacker has been in fine form for Tottenham Hotspur this season and scored twice in a dramatic 2-1 win over Scotland in October.

"I'm not sure he realises how good he is yet because he's still relatively young," Coleman told Radio Wales Sport.

The 23-year-old Bale has been in impressive form in the Premier League, with his former Spurs manager Harry Redknapp bracketing the Welshman in the same talent class as superstars Ronaldo and Lionel Messi.

"You know when he's on the pitch he's got the capacity to pick the ball up, run the length of the field and take two or three players on," Coleman added.

"Even if you don't score, what that does to the opposition is put them on the back foot; they're always wary of him because of his pace and his power.

"He's getting used to that, so he's only going to get better."

Bale's performance in the World Cup qualifier against Scotland earned Coleman his only victory to date.

That result, although it was followed by defeat in Croatia, at least relieved some of the pressure that had been building since Coleman took over.

Since then Wales have lost five out of six games under the former Fulham, Real Sociedad, Coventry and Larissa boss, including a heavy 6-1 defeat by Serbia in a World Cup qualifier.

While Bale has been at Coleman's disposal during his short reign, the attacking threat of Craig Bellamy has been missing from Wales duty.

The Cardiff striker has not played for his country since the 2-0 friendly loss to Bosnia-Hercegovina on 15 August.

Bellamy, 33, missed all four of Wales's 2014 World Cup qualifiers due to injury and off-field problems, and doubts remain about his international future.

But Coleman reiterated that the door is still open for Bellamy to return to the international stage.

"Throughout his career Craig for a long time has had problems with his knee... but on form he's a devastating striker and it looks like he's finding his rhythm again," Coleman said.

"There's nothing changed with us [Wales], the door is open and Craig knows that.

"He's got to be playing regularly for Cardiff and finding his feet again, and he's had problems off the field - that's been well documented - I've spoken with him about that.

"But once he finds his feet again the door is open, it always is for Craig."

Wales' next scheduled international is a friendly against Austria on 6 February at Swansea's Liberty Stadium, before their next World Cup qualifier away to Scotland on 22 March.