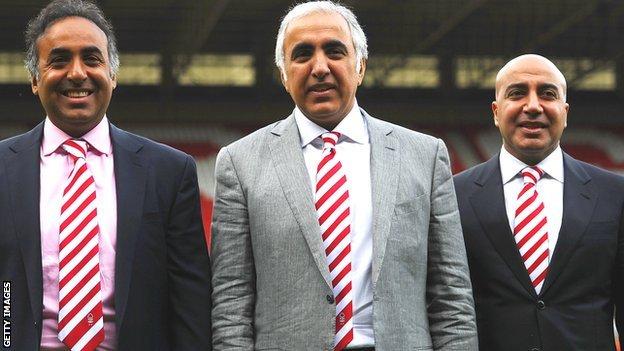 Nottingham Forest's change of chairman has nothing to do with rumours of a financial crisis at the Championship club, BBC East Midlands Today reports.

Reports of money worries began when the players were paid a day late last month and the rumours gathered momentum when Omar Al Hasawi stepped down and was replaced by his cousin Fawaz.

But sources close to the owners say the delay was due to a banking error.

And the Al Hasawis insist their financial commitment to Forest remains.

Sources have described other reports of unpaid bills as "largely inaccurate" and say the Al Hasawi's long-term commitment has been demonstrated by the ongoing work to install two giant replay screens at the City Ground at a cost of more than £1m.

Meanwhile, new chairman Fawaz has promised to take on a more hands-on role than Omar, who has stepped down to concentrate on other business interests.

The Kuwaiti-based family completed a purchase of the controlling stake of former chairman Nigel Doughty, who died in February, in the summer.

Since then, Forest signed 16 players with Omar as chairman and the new-look team have moved to within three points of the play-off places under manager Sean O'Driscoll.