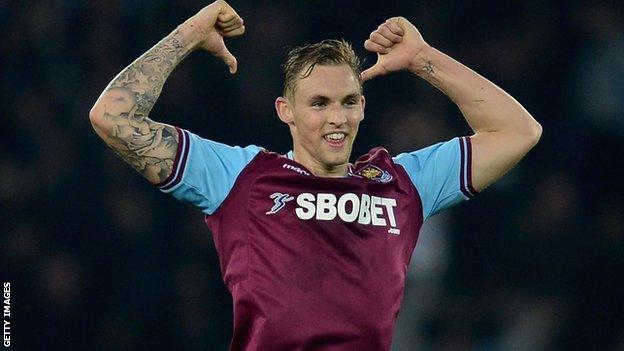 Wales midfielder Jack Collison said he was delighted after playing for the first time following seven months out with a knee injury.

Collison played 45 minutes for a West Ham development squad in an under-21 match against Norwich on Monday.

The 24-year-old hadn't played since the Hammers' Championship play-off final victory over Blackpool in May.

"It was great to be back out there again," Collison told West Ham's official website.

West Ham lost 3-1, but Collison was happy to be back.

"I am obviously a little bit rusty, but I have ticked a box by completing 45 minutes and hopefully it will be onwards and upwards from there," he said.

"It was great to be playing football again, even though it was not the best conditions out there."

Collison's return is a welcome boost to injury-hit West Ham, who are without the likes of Mohamed Diame, Ricardo Vaz Te and Yossi Benayoun.

The player has a long-standing knee problem and suffers with fluid on the joint, which manager Sam Allardyce has said has to be managed carefully.

Collison would not pinpoint a date for his first-team return, focusing instead on continuing his rehabilitation.

"I will leave that for the manager to decide," Collison said.

"I'm delighted for Jack. He's had such a traumatic time with the injury.

"He's still a good age Jack, it's all in front of him he's just got to try and get himself fit.

"He deserves to be back."