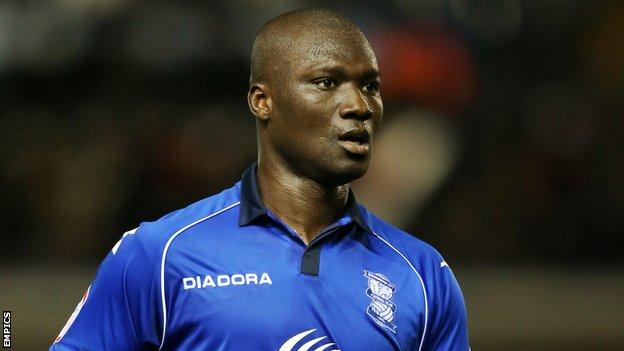 Birmingham City midfielder Papa Bouba Diop says that he wants to stay at St Andrew's "forever", as his short-term contract with the club nears an end.

The 34-year-old has only played twice since joining Blues in October, and his current deal expires later this month.

But after scoring on his first start in their 2-2 draw with Crystal Palace on Saturday, Diop insists he is keen to extend his stay at Birmingham.

I am here forever - I'm here and I won't go anywhere

The Senegal international's first-team opportunities have been limited as he looked to regain his fitness, having been without a club since his release from West Ham in May.

And Diop revealed that after eight weeks of training with the Championship side, he now feels match fit and ready to take his chance in the side.

"I had three reserve games, and then I talked to the gaffer [Lee Clark] and he said I'm ready," the former Fulham and Portsmouth man said.

"I'm very hungry. You see the players play every week from the bench. So in training I worked hard waiting for my chance.

"And now I'll keep going, this is only my first game. This is my time, and I'll continue like this."