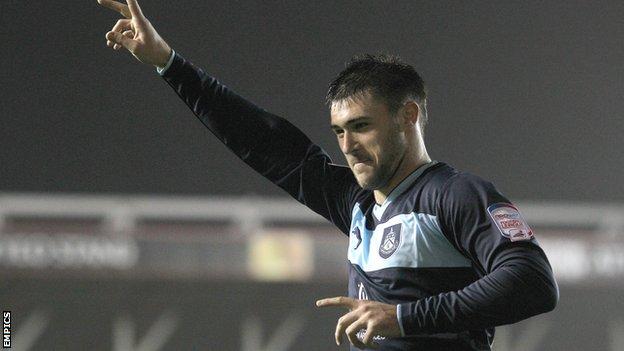 Burnley say they will resist attempts to buy Charlie Austin, the leading scorer in English football this season, during the January transfer window.

The 23-year-old striker has scored 22 goals in all competitions and is expected to attract interest from Premier League clubs next month.

But speaking at the club's AGM on Monday, chief executive Lee Hoos said: "We have no plans to sell Charlie.

Battle for the Golden Boot

Crystal Palace's Glenn Murray is the leading scorer in the Championship this season with 20 league goals, but Austin's three strikes in the Capital One Cup make him the top scorer in all competitions in England this season

"We do not want to sell Charlie and we would not encourage offers."

He continued: "We just want to keep Charlie and let him enjoy his football as he is doing right now and keep scoring goals and let's see where it takes us at the end of the season."

Burnley experienced a similar scenario last season, when a bid from Southampton for Jay Rodriguez was rejected in January but they allowed him to leave in June when newly-promoted for the player, believed to be in the region of £7m.

Former Swindon striker Austin equalled a club record earlier in the campaign, for the Clarets, and also became the

Meanwhile, co-chairman Mike Garlick has ruled out the possibility of a spending spree by the club in January.

Instead, manager Sean Dyche will be asked to explore the loan market if he wants to bring in any new players.

"I hate buying in January. It is not always the best time to buy, so January will not be a priority," said Garlick.

"We have quite a few players out of contract here. Sean has been here about eight weeks and is still very much fine tuning what we've got.

"There may be something in January for extra loans, but I don't think we are planning on any major activity."

has already agreed a free transfer from Vancouver Whitecaps and will link up with the Championship club on 1 January.