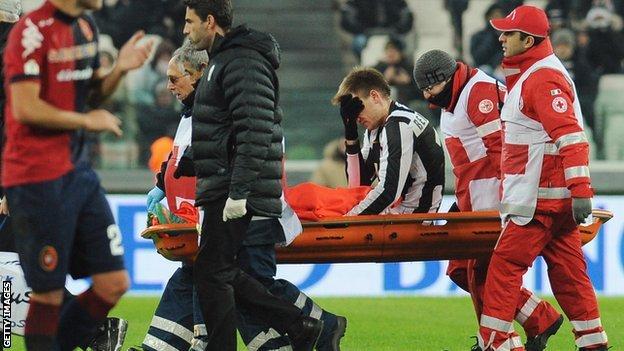 Juventus striker Nicklas Bendtner could be out for up to two months because of a thigh injury.

The 24-year-old is on a season-long loan at the Serie A club from Arsenal and picked up the problem in a cup match against Cagliari on 12 December.

He has since been treated in London and undergone surgery.

"His prognosis and rehabilitation schedule will be verified with English doctors over the next few days," said a Juventus statement on their website.

The setback is a blow to Bendtner, who is trying to kick-start his career in Italy after failing to establish himself at Arsenal.

"The Danish striker was operated on in London last night by Arsenal consultant Ernest Schilders, for the reinsertion of the adductor longus tendon in his left thigh," explained the Juventus statement.