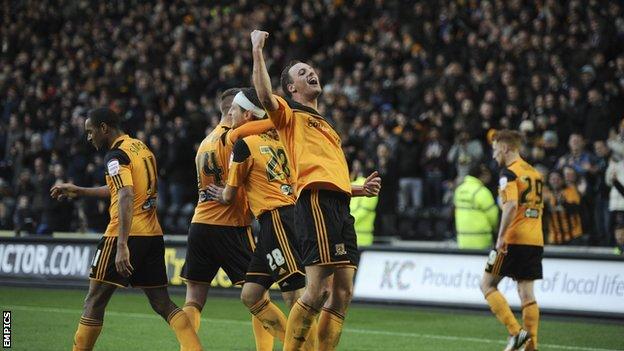 Hull City owner Assem Allam says the club will look to leave its KC Stadium home if they gain promotion back to the Premier League.

Tuesday marks the 10-year anniversary of their first game at the ground, which the Tigers share with Super League side Hull FC.

If you rent a house, then you don't pay to put an extension on it

"I don't see the future of the club being at the KC Stadium," Allam told BBC Radio Humberside.

"If we get promoted, then there are other plans."

The Egyptian took over the club in December 2010 when they were around £35m in debt and the following May held discussions with Hull City Council about purchasing the ground and redeveloping the surrounding area in order to build a sporting village.

However, in September, talks ended without a deal being agreed and Allam is unwilling to spend money on a ground they do not own.

"There is no future for me and the KC Stadium unless it is freehold. If you rent a house, then you don't pay to put an extension on it," he said.

Allam is hopeful that the club, currently fourth in the Championship, can secure promotion back to the top-flight which they left when they were relegated in May 2010.

"The first season I came in we finished 12th and then eighth last season and we're level with third currently," he continued.

"We have managed to get Steve Bruce as manager and some more good new players and I hope we will be a Premier League team next season."

Meanwhile, the club have appointed Nick Thompson as their new managing director.