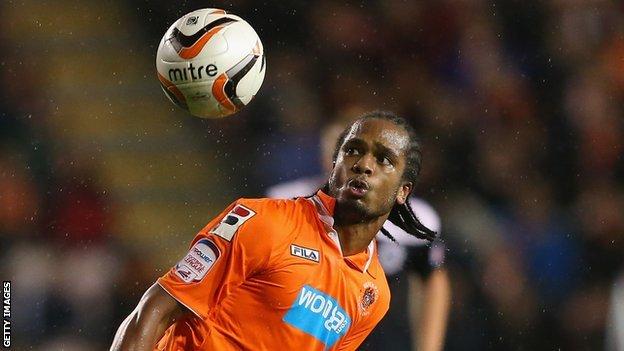 Blackpool snatched a point at Huddersfield as substitute Nathan Delfouneso netted a stoppage-time equaliser at the John Smith's Stadium.

The home side looked on course to record a first win in eight games when Anthony Gerrard headed home in the 66th minute - his first goal for the club.

But the points were shared when Delfouneso fired in from six yards following good work by Thomas Ince.

Huddersfield are on the longest current winless sequence in the Championship of eight matches (D4, L4), and lie at the foot of the division's 'form' table.

Blackpool dominated the entire first half but failed to make the most of the many chances they created.

Gary Taylor-Fletcher shot wide when through on goal after 90 seconds, before Wes Thomas shot wide and Isaiah Osbourne failed to find the target from six yards.

Blackpool resumed their dominance after the break, but found themselves behind when Gerrard opened his Huddersfield account by heading in Adam Clayton's corner.

Huddersfield grew in confidence after that and Jermaine Beckford's speculative effort from 30 yards almost made it 2-0.

But Ince, a target for Liverpool, got the better of two Huddersfield players to reach the by-line and feed a pass to Delfouneso, who struck from close range to secure a point for Blackpool.

"I certainly would have taken a point after the first 45 minutes.

"We never got out of the traps and Blackpool could have been out of sight by half-time.

"When you get 1-0 up into injury time you think 'we'll take the result, not the performance', and if we'd got three points it would have only papered over the cracks of how poor we were in the first half.

To get a point out of that first-half performance is the only positive really."

"When you've get a set of players like we have who are very creative, good footballers, good technique, eventually I do believe someone will take a tonking.

"I'm not sure who, where or when, but someone's going to take an absolute tonking off us.

"I said to the players, 'don't enjoy the game until we're in front', because it was almost too easy at times we were playing so well.

"A lapse of concentration, a free header from a set play, and you're up against it for a while because they've got their backs up and something to hold on to."