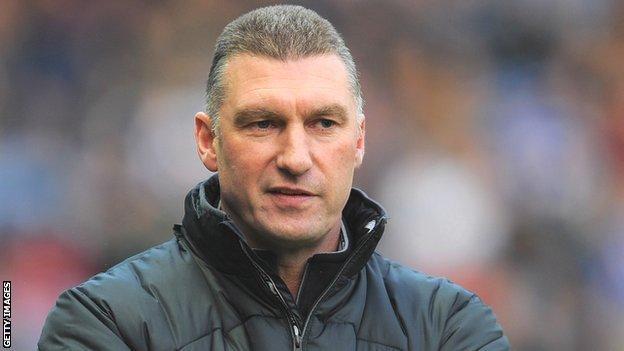 Foxes boss Nigel Pearson got a hostile reception from the club he left in acrimonious fashion last year but he masterminded a fine defensive display.

Hull's Jay Simpson came closest to a goal but his shot was cleared off the line by Richie de Laet.

French winger Knockaert provided the visitors' main threat throughout and, as well as that miskick from Paul Konchesky's first-half pull-back, he also twice shot wide before the interval.

But the second-placed Tigers, who were hoping to mark the 10th anniversary of moving into the KC Stadium with a victory that would have kept them just three points off the top of the table, edged a tight contest.

The hosts made the brighter start, with Simpson turning a weak side-footed shot wide and Leicester's Konchesky being forced into an awkward headed clearance inside his own six-yard box.

Leicester responded with their best spell of the game. Knockaert had those three good chances and Hull goalkeeper Eldin Jakupovic then needed a strong arm to keep out Danny Drinkwater's strike.

But the hosts, inspired by the return of attacking midfielder Sone Aluko, began to get on top.

Abdoulaye Faye sent a headed effort into the side netting and Aluko forced a fine low save from Kasper Schmeichel after cleverly creating space for himself.

Aluko then set up the best chance of the first period when he found Simpson and the striker looked certain to score when he rounded Schmeichel, but De Laet raced back to clear his effort off the line.

The chances dried up in the second half as the match deteriorated in driving rain.

Hull piled forward late on but Schmeichel twice denied Simpson and Leicester, who remain in fifth place, secured a point despite going a third successive match without scoring.

"The big chances - we should be scoring. Anyone who has seen us over the past four or five months will know that's the frustration.

"In big games especially, you can't be expected to create eight or nine chances. Today we've had four or five. Really we've got to take one of them in a big game.

"It's gnawing away at us all. It's not just the goalscoring it's all round we've got to contribute. Look at Abdoulaye. I'm shouting 'goal' as soon as I see him with that big head three yards out coming towards it.

"You think it's in the net. It's all round that the chances have come. I hope it's not going to be our Achilles heel."

"Today we defended with a lot of spirit and created some good opportunities.

"On another day we could have won it but they could argue the same.

"It was two decent sides trying to play football. It was an interesting game tactically but unfortunately it was 0-0.

"It was (a point gained) in the sense that we have had a lean period of late. I think we would have won that game a month ago."