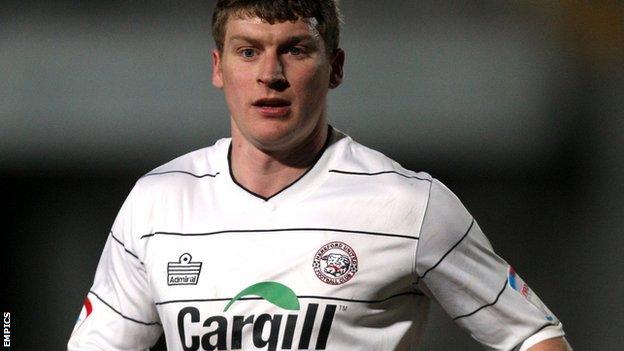 It was 2-0 at the break after Andy Cook's neat finish and Andrew Boyce's own-goal, both from Colbeck centres.

The Imps were awarded a penalty when Cook handled and Alan Power slotted home from the spot but Craig Disley headed home after a scramble.

Colbeck sealed the win when his corner beat everyone and went in.

"The result certainly flatters the opposition. We've had chances but we can't afford to give away very soft goals.

"As a goalkeeper Paul (Farman) is a very good prospect and he will make mistakes. When you are the last line of defence it can cost you and it has today but to be fair to him he's come in and put his hand up and apologised to his team-mates.

"At half-time we got our heads up and responded well. We got back in the game and were on top but a mistake again cost us. Our defenders have been very solid but today they put in a performance that they will want to forget and a result that we want to put behind us."

"I thought the players were fantastic, barring probably five or six minutes of the second half, I thought we were pretty much on top the entire game.

"Early on I think they just tried to test us out physically and they very much played route one football.

"I was disappointed with how we started the second half but we rectified that by scoring pretty much straight after them and I think that was the game done and dusted."