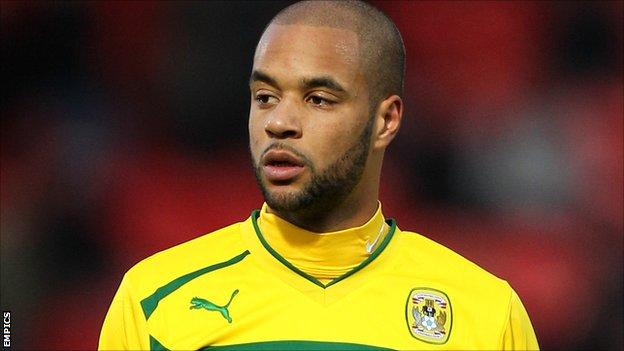 League One top scorer David McGoldrick took his tally to 16 in 21 games as he completed Coventry City's fightback from a goal down to win at Stevenage.

Lucas Akins gave the home side the lead from the penalty spot after Felipe Morais was fouled by Carl Baker.

It took the Sky Blues until 79 minutes to level when Richard Wood tapped in after a blocked John Fleck shot.

Baker made amends for the penalty with a curling strike on 89 minutes, before McGoldrick chipped home a minute later.

But McGoldrick's yellow card for taking his shirt off in celebration (his fifth of the campaign) means that he will now miss Saturday's trip to MK Dons.

Ahead of Saturday's trip to MK Dons, Mark Robins' men have climbed to 11th, just five points off the League One play-offs on 34, while ninth-placed Stevenage have 37.

"It's a tough place to come this, so I'm really pleased. We had five or six chances in the first half and didn't take them. But, in the second half, we made the possession pay.

"We controlled the majority of that game and the supporters played a massive part in keeping us going forward.

"It's a great shame because David McGoldrick will miss the MK Dons game. It's a pain in the neck for me and it's a travesty. It's not a great rule.

"There are smiles on the faces of the journalists, which is what I really wanted to see this Christmas. "