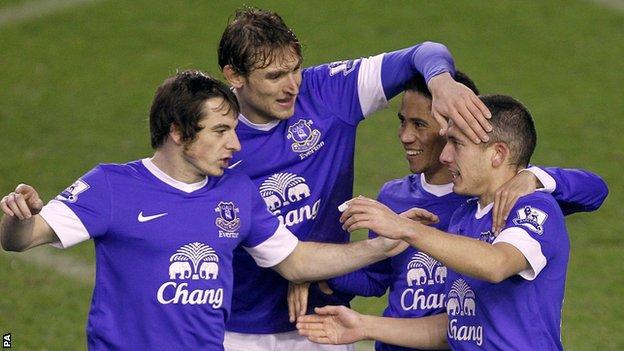 Everton stretched their unbeaten run to seven Premier League games as goals from Leon Osman and Phil Jagielka gave them victory over Wigan.

Osman opened the scoring in the 52nd minute when his shot deflected off the arm of Gary Caldwell and into the net.

Everton captain Phil Neville then marked his 500th Premier League appearance by providing the assist for Jagielka to head in Everton's second.

Everton are unbeaten in 13 home games, their last defeat coming at the hands of Arsenal in March

David Moyes's side are fifth, two points behind third-placed Chelsea, who they host on Sunday. Wigan, meanwhile, remain 18th, one point adrift of safety.

The two sides went into the Goodison Park encounter in starkly contrasting form, with Everton having lost just once in the Premier League since early September, while Wigan have managed only one win in their last six games.

The home side were on the attack straight from the kick-off as Darron Gibson found Nikica Jelavic, who in turn teed up Victor Anichebe on the edge of the area, but the striker lashed his shot high over the bar.

That early effort proved something of a false dawn, however, with chances rare over the course of the next 20 minutes.

Wigan were looking dangerous on the break but wasteful in the final third and the best chances before half-time fell Everton's way.

The Wigan defence failed to clear their lines in the 38th minute and the lively Anichebe almost capitalised, but his shot was deflected behind.

A succession of corners then followed as Wigan players packed out the penalty area before cries of handball rang out from the home end as Maloney controlled the ball with his chest before clearing, but referee Lee Mason waved play on.

The woodwork denied Thomas Hitzlsperger what would have been a stunning opener for Everton just two minutes into the second half.

The former Aston Villa midfielder first knocked the ball through the legs of James McCarthy before launching a powerful effort from over 35 yards that, much to the relief of Al-Habsi, smashed against the top of the crossbar.

A massive slice of fortune gave Everton the lead in the 52nd minute. Osman tried his luck from just outside the area and his shot, which looked to be heading wide, took a big deflection off the arm of Caldwell and looped into the back of the net with Al-Habsi stranded.

Wigan felt they should have had a penalty just before the hour when Maloney tumbled under a challenge inside the area, but Mason waved away the protests, and Everton compounded Wigan's misery by adding a second goal 13 minutes from time.

Neville delivered a pinpoint cross into the area and Jagielka rose highest to power a header beyond Al-Habsi.

Wigan were not giving up on the chance of snatching a much-needed point, however, and the deficit was halved eight minutes from time. A shot from substitute Franco Di Santo looped up into the air off an Everton player and Kone got between two defenders to bundle the ball home.

Sensing the possibility of an equaliser, the visitors pushed on after that and Everton had to withstand some late pressure to ensure they took the three points.

Everton manager David Moyes: "It was a hard fought win. I like the way Wigan play, they have a lot of the ball and when you have your chances you have to make the most of them and fortunately we did that.

"We have played well this season but I knew this would be tough. There will be a lot of teams who have problems against Wigan.

"I was happy when we got the first. I never really felt that secure and we gave a goal away which made it a bit rocky towards the end, but we got the three points."

Wigan manager Roberto Martinez: "I felt the performance deserved a positive result. Everton are going to show a competitive edge and you just have to match that, I felt we did that.

"It was a stonewall penalty [when Shaun Maloney fell under a challenge inside the area] and that was a key moment.

"That really affected us but we need to make sure we get even stronger on Saturday and get the three points."