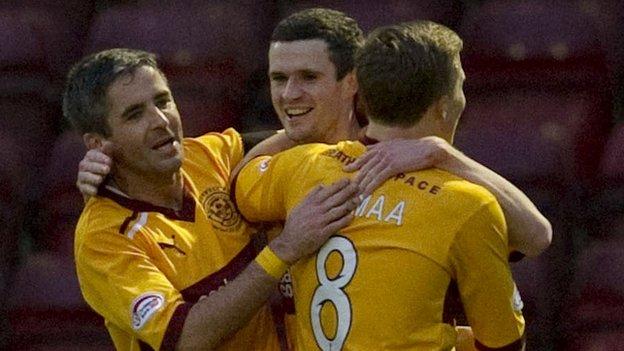 Forward pair Jamie Murphy and Henrik Ojamaa impressed as they inspired rampant Motherwell to a convincing win over Aberdeen.

A Murphy cross set up Tom Hateley to head Well into a ninth-minute lead and the striker fired the second on the half hour.

But Murphy restored the lead just before the break before Ojamaa set up Michael Higdon to power in a fourth.

Murphy and Ojamaa have both been linked with moves away from Fir Park in recent days and will certainly have done their market value a world of good as Well gained revenge for their recent Scottish Cup defeat to the Dons.

There was something of an inevitability about the result.

Not only because it is now 12 games since the visitors have beaten well but with Aberdeen going into the match having lost every second game since 27 October and Motherwell having won every other game since 10 November.

Motherwell were due a win, the Dons a defeat - and so it proved.

Yet it was Aberdeen who started the brighter and Niall McGinn should have done better than fire wide from 12 yards after goalkeeper Darren Randolph could only parry a Joe Shaugnessy header following a fine rampaging run forward by the young defender.

Josh Magennis curled an effort just wide, but shaken Well appeared to take heart from Nicky Law's 18-yarder off the face of the Dons crossbar.

The home side took the lead shortly after when Murphy's cross found Hateley climbing above his marker at the back post to head in from 10 yards.

Motherwell captain Keith Lasley was fortunate to escape without even a yellow card after a body-check on the breaking McGinn, while Rory Fallon powered in a left-foot drive that Randolph parried over the Dons bar.

However, Well were proving the more clinical as the play flowed from end to end and Murphy weaved his way to the edge of the Dons penalty box before side-footing into the far corner to extend the lead.

Motherwell's adventurous 3-4-3 formation, devoid of the influential Stevie Hammell and Chris Humphrey for tactical reasons, was as fragile at the back as it was exciting in attack and the Dons struck back quickly.

Hayes marked his return from injury by powering his way from the halfway line through the heart of the Well midfield and fired past Randolph from 25 yards.

Gavin Rae and Mark Reynolds both sent long-range efforts whizzing past the Well woodwork, but the home side extended their lead seconds before the break.

Zaine Francis-Angol marked his return to the starting line-up by slipping a pass through to Murphy, who calmly slotted his second goal of the game past goalkeeper Jamie Langfield.

That still did not prevent manager Stuart McCall from replacing the suspect Ramsden with Adam Cummins after the break.

The substitute was himself immediately left trailing by the flying Hayes, but the winger's low drive was straight at goalkeeper Randolph.

While Aberdeen were still well in the game in terms of possession and chances, they were soon well out of it in terms of the scoreline when Ojamaa jinked into the penalty box and set up Higdon for a six-yard drive off the underside of the crossbar.

With the desperate Dons pushing forward, their defence was being split open at will by a Well side who ought to have extended their lead when Ojamaa was felled by Clark Robertson.

Murphy failed to complete his hat-trick with a poorly-struck penalty easily saved by Langfield.

The goalkeeper also marked his return from suspension with a fine point-blank save to deny Ojamaa a goal that his afternoon of trickery deserved.