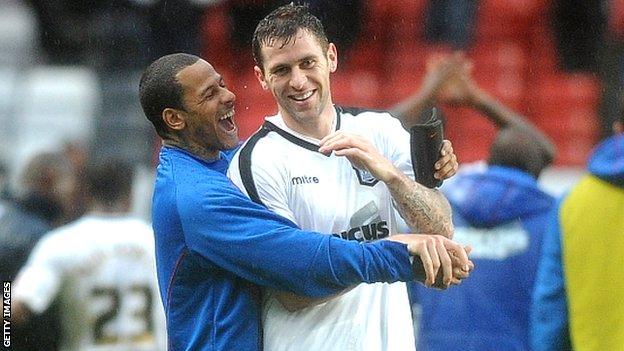 The visitors wasted a chance to open the scoring when Campbell fired wide from the penalty spot after Emmanuel Frimpong brought down Lee Martin.

But he atoned for that by converting Murphy's pull-back after Charlton failed to clear Andy Drury's cross.

Murphy doubled the lead with a close-range finish and, despite Danny Haynes scoring from the spot, Ipswich held on.

It condemned Charlton to a third straight defeat on manager Chris Powell's 100th game in charge of the club and they are now 18th in the Championship - two places above Ipswich.

Powell would have been relieved when Campbell screwed his penalty wide of Ben Hamer's post, and the hosts almost took the lead as Dale Stephens rattled the post with a 25-yard free-kick.

But they were punished when Drury's centre was not cleared and Murphy found Campbell to make up for his earlier mistake.

Although Stephen Henderson saved well from Ricardo Fuller as Charlton tried to reply, Powell's men were soon further behind.

Stephens lost possession and after Martin's shot was blocked by Hamer, Murphy was on hand to tuck in the rebound.

Charlton were lifted by the introduction of Bradley Pritchard and Johnnie Jackson, and Rob Hulse headed straight at Henderson before Fuller and Jackson got in each other's way as they looked to meet a cross.

They were given a lifeline when Martin tripped full-back Chris Solly in the area and Haynes blasted into the top corner.

Hulse was denied by the feet of Henderson and Stephens hit a free-kick narrowly wide before sending another drive off target.

An overhead kick from Yann Kermorgant flew over the bar, but Ipswich came through to edge further clear of the drop zone.

"No excuses. We were beaten by a better team, especially in the first half. We were very loose and sluggish in our marking.

"Ipswich didn't have chances in the second period but the damage was already done. We were huffing and puffing and put players on, but you need a platform to perform and we were very up and down.

"We went on a superb run but now we have lost three in a row. We have been here before and have responded and we have to do that again."

"The self-belief comes with winning games. It doesn't come from me, it comes from within.

"They are professional players and it helps when you are winning, or at least putting in decent performances.

"It gets a bit flaky at times and you wonder if you are going to be able to hang on. But they did and I'm pleased with them."