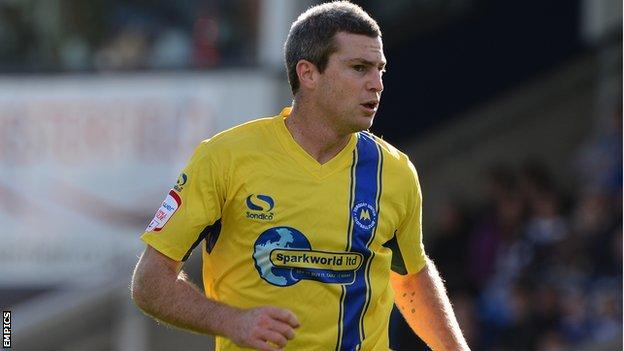 Plymouth teenager Tyler Harvey rescued a point on his full debut with a late equaliser against Torquay United in the Boxing Day Devon derby at Home Park.

Gulls defender Aaron Downes looked to have won it when he latched onto Kevin Nicholson's cross to score from close range on 78 minutes.

But, in the final minute, 17-year-old Harvey turned to fire in a superb left-foot shot from the edge of the box.

Torquay are now unbeaten against Argyle in their last five derby meetings.

Wind-assisted Argyle had by far the better of the first half, but the second half began with home keeper Rene Gilmartin doing well to keep out Nicholson's thumping 25-yard free kick.

When Nicholson swung the ball in for centre-half Downes to head down and fire into the roof of the net, that sent the Gulls' 1,525 away following into delirium.

"It was terrible conditions today, wind, rain, but I thought we played really well and pretty much dominated the game. We know Torquay are a really good side with some really good players and some match winners. We know they're dangerous and I thought today we coped with everything they threw at us"

"We took the game to Torquay, created numerous chances and we could have had a few more goals but to be a goal down with not long left we're pleased to get an equaliser.

"I think it's a penalty. It's just the way it's going at the minute, everyone's talking about diving so the referee feels like he's got to do something about it."

"There's no doubt about it, our goalkeeper was worked an awful lot more than theirs. They were the aggressors for most of the day, lets be fair about it. Even though we're disappointed to concede a late equaliser again, I think overall it was a fair result"

"For attitude and endeavour from our players, we again applaud them for it.

"I thought our fans were a lot louder than the Plymouth supporters and I'm proud of every single one of them."