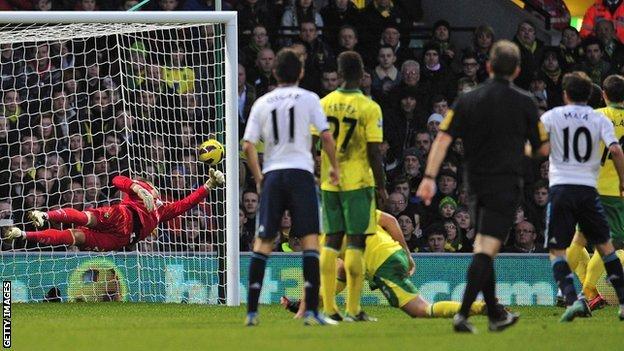 Mata lit up a cagey game with a 25-yard shot before the break that just beat Mark Bunn and flew in off the post.

Norwich played with plenty of bite and spirit but did not force Blues keeper Petr Cech into a noteworthy save.

Sebastien Bassong came closest for the hosts with a downward header that bounced over the bar late on.

Apart from that injury-time scare Chelsea were untroubled.

And although they never looked likely to get anywhere near reaching the heights of the stunning 8-0 win over Aston Villa, interim manager Rafael Benitez will have been thrilled with a thoroughly professional display.

Benitez had opted for the more defensive-minded John Mikel Obi ahead of Frank Lampard in midfield and the same fluency and slick passing which had blown away Villa was in short supply.

The first 20 minutes were devoid of quality, chances and indeed incident.

Norwich were comfortable in defence, even though they offered little going forward as they looked to bounce back from the 2-1 defeat by West Brom which had ended their 10-game unbeaten run.

But Victor Moses, Mata and Oscar began to see plenty of the ball in the second half of the first period.

David Luiz's willingness to run forward from midfield began to stretch the home defence and he twice shot wildly wide, while Mikel went close to grabbing his first Premier League goal with a fierce rising drive that went just over.

And the pressure told when Mata smashed home his 13th goal of the season with a breathtaking 20-yard left-foot strike. Oscar wriggled away from a challenge and found the Spaniard, who beat Bunn with a fierce strike that the keeper did well to get his fingertips too.

There was nothing unlucky about Juan Mata's 13th goal of the season. It was a terrific strike and was enough to earn Chelsea all three points. Norwich did not really test Peter Cech in the Chelsea goal and their best chance came in injury time when Sebastien Bassong's header went over the bar.

The visitors almost made it 2-0 just after the interval, but Bunn did well to keep out a lunging effort from Moses following a clever near-post corner routine, while Moses also went close with a low strike following a Cesar Azpilicueta cross.

Chelsea showed no signs of trying to settle for a risky 1-0 scoreline but the Canaries began to commit greater numbers to attack and play with far greater urgency.

The ever-dangerous Wes Hoolahan provided their main threat but still they could not create opportunities.

Fit-again captain Grant Holt dragged a shot wide from an offside position after a fine pass from Hoolahan and a couple of Hoolahan set-pieces could easily have led to goals.

Their best chance came in the dying seconds, when Bassong's downward header from a corner went comfortably over the bar.

Chelsea held on, but they failed to close the 11-point gap on leaders Manchester United, who beat Newcastle with a injury-time strike.

"This is a side that have just put eight past Aston Villa. We are playing against Chelsea who are on the back of a really good run and if you make the game too open they can really hurt you.

"If we had a little bit more quality in the final third we could have got something, but it is difficult to get it right in both areas.

"We were right in it. Our goalkeeper has not had to make too many saves [to make] and the one bit of quality shown by them was from Mata.

"That's why Chelsea pay the money they do for the likes of Mata.

"We have been on a good run. We have lost the last two games by one goal. If the lads keep putting in the shift they have [been doing] we will get our points."

"We knew that was a difficult pitch. They won against Manchester United and Arsenal. It was tough and the weather was not helping.

"I was really happy with the performance of the players. The team are showing character. I am really pleased with the work-rate and the style of play.

"They didn't have too many chances and we had two or three to score a second goal.

"With these kind of games against teams who are strong physically, you have to be careful.

"Juan is a player who can make the difference - we are really pleased with him. He is playing really well.

"Even without the ball he is working hard but when we are in possession he is making the difference. I always say the same, if the team are playing well these players can make the difference."