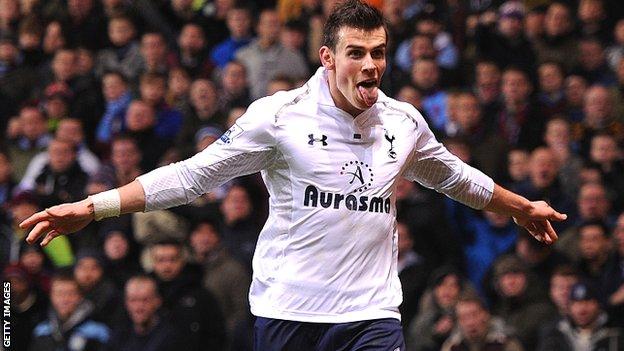 Villa, who on Sunday were beaten 8-0 at Chelsea in their worst ever Premier League loss, had little possession but somehow kept Spurs out up to half-time.

But Kyle Naughton found Jermain Defoe to stroke in the opener from 10 yards.

Bale ghosted through on the break for the second, then drilled home an Aaron Lennon pass, and completed his treble after Gylfi Sigurdsson's cut-back.

After such a capitulation at Stamford Bridge last weekend there was great interest in how Villa's inexperienced young team, who had fashioned a 3-1 victory at Liverpool the week before, would cope with Tottenham's array of attacking talent.

Having been frustrated by a stalemate with Stoke last week, Spurs may have feared losing further ground in the quest for Champions League qualification, but their slick passing eventually clicked into gear as they moved back into the top four on goal difference with their biggest league win under Andre Villas-Boas.

Villa manager Paul Lambert made three changes from the team chastened at Chelsea, although the three central defenders from that rout were retained.

From the outset the home side sat back, their two wing backs rarely venturing forward and often forming a blanket of five camped in formation around their penalty area.

Stroking the ball around nonchalantly as if in a practice game, Spurs forced 15 corners by half-time, only five short of the record for an entire Premier League match, set by Portsmouth against Fulham in 2006.

Tottenham on their travels

Despite their dominance, however, the closest Spurs came to breaking the deadlock in the opening period was from two long range Bale drives, smartly kept out by the stoic Brad Guzan.

The American also rushed out of his goal to block Defoe's shot on the one occasion the diminutive poacher got in behind the Villa defence.

The home side introduced Marc Albrighton at the break and hinted at greater ambition, but their decision to revert to a flat back four proved more to Tottenham's liking.

Naughton found space 30 yards out and slid a perfect first-time through ball to Defoe, who placed his shot with the outside of the boot between Guzan's legs for his 10th league goal of the season.

At the other end Christian Benteke had an excellent opportunity to fashion an equaliser but with two players well-placed in the box he picked out a Spurs defender and the trademark Tottenham counter-attack that followed effectively killed off the contest.

Bale demonstrated both pace and poise, rounding Guzan and flicking into the net with his left foot from eight yards.

When Walker played an inviting pass for Sigurdsson on the right, Bale was again in the right place for the cross, and the 23-year-old Welshman lashed the ball emphatically past Guzan to record his first hat-trick in the top flight as Villa equalled an ignominious Premier League record of conceding 12 goals in two matches.

"I'm not surprised by anything in football.

"Things can happen. You know it can happen, especially when you are playing one of the top sides."

"It was very good from start to finish. We fully deserved it.

"It didn't happen for us in the first half but we kept our concentration and came on very strong in the second half.

"If one team was going to win it, it was us and overall it was a very good performance."