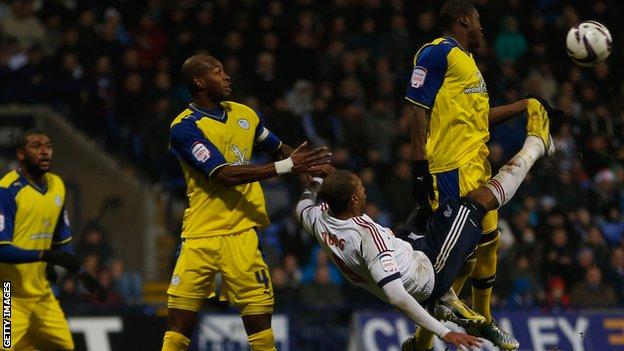 A solitary goal from Mamady Sidibe was enough for Sheffield Wednesday to beat Bolton Wanderers and keep the Owls out of the Championship's relegation zone.

The striker's powerful 25th-minute header was his first goal for the club since his arrival on loan from Stoke.

David Ngog and Martin Petrov had both missed chances for Bolton before the ex-Swansea and Gillingham man's strike.

Chris Kirkland denied Benik Afobe with a fine save after the break as Wednesday claimed a third straight win.

Bolton manager Dougie Freedman made four changes to the line-up that lost 5-4 on Saturday to bottom of the table Peterborough.

And once Wednesday's Michail Antonio had failed to latch onto an early error from Sam Ricketts, Bolton had the better of the early exchanges.

Ngog's fine solo run ended when Kirkland made a good block to deny him, while Petrov lost his footing while preparing to shoot.

Wednesday's goal came against the run of play, with Sidibe outjumping Tim Ream to head Lewis Buxton's cross past a helpless Adam Bogdan.

Sidibe was just short of adding a second at a Rhys McCabe corner while Keiran Lee drilled a shot straight at Bogdan before the break.

The home side came close to equalising when Ngog touched the ball wide from close range after 53 minutes, while Kirkland was in the right place to block Afobe's attempt at close range from a superb Chris Eagles cross with 20 minutes to go.

Ngog then headed a Zat Knight cross miles wide in the closing stages as Wednesday held firm for all three points.

Bolton manager Dougie Freedman: "I put the defeat down to their good defence, which we couldn't break down and the consistency of our results is not where it should be at this time.

"It does surprise me that we are so close to the bottom but it doesn't concern me because I've seen what this group is capable of.

"I think the players need a bit of a hand and we need to recruit two or maybe three guys who have played at this level before."

Sheffield Wednesday manager Dave Jones: "It was a perfect away performance, in the last five minutes we probably panicked a bit, but in the first half we got them on the back foot."

"Mamady's goal was probably a perfect centre-forward's goal. He deserved it because he's worked his socks off for a number of years to get back fit again.