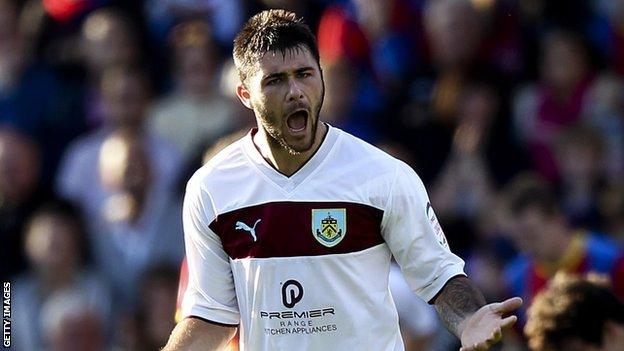 Goals from Charlie Austin and Michael Duff gave Burnley victory over Derby in the Championship at Turf Moor.

Austin bagged his 23rd of the season just before the break when Derby failed to deal with Kieran Trippier's cross.

Chris McCann then had a shot blocked and Mark O'Brien headed wide as the visitors searched for an equaliser.

Austin could have got his second when he miscued from close range but Duff headed in from Ross Wallace's corner for Burnley's second on 73 minutes.

Burnley's win, their first in five games, always seemed to be on the cards after they started brightly.

The former Swindon striker clearly loves playing against the Rams - this was his fifth goal in four games against them.

Derby should have got back on level terms barely a couple of minutes later, but Mark O'Brien could only head Michael Jacobs's free-kick wide.

Wallace hit the post for Burnley as the hour mark approached, but the Clarets were not to be denied a second.

From Wallace's corner, Duff rose highest to nod home at the far post.

Theo Robinson had the last chance of the game but missed the target from 12 yards out as Derby suffered a seventh away loss in the league this season.

"I have spoken recently about how the performance levels have been worthy of more points on the board and today there were signs of another good performance.

"I don't think it was quite as routine as people think because Derby are a fair side.

"The clean sheet was appropriate today given that we have had a couple of goals recently that have gone in against the run of play and that can be a bitter pill to swallow but they went about their business well today.

"A lot has been made of Charlie scoring but behind that there are another 10 players and it is important that they are ready to do their job if he has a quiet day."

"I'm not too disappointed with the performance, it's the goals that we are conceding at the moment, both were technically own goals as well.

"First half we weren't too good in terms of creating but we certainly restricted Burnley to only a few chances.

"We were pushing for the equaliser and we had a chance but it was a good save by the keeper.

"We hit the post from the rebound and a couple of minutes later it is 2-0 and it's almost game over."