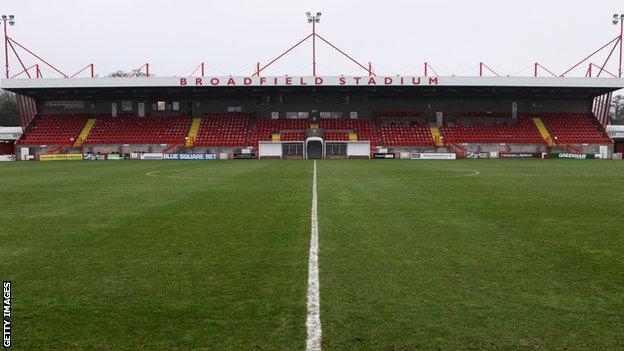 League One side Crawley Town have announced the appointment of Richard Low as their new chief executive.

The 44-year-old, who spent two years as a director and chief operations officer at Aldershot Town before leaving last month, replaces Alan Williams.

"Crawley Town has made fantastic progress in the last couple of years," Low told the club website.

"Alan is a hard act to follow but I am confident that I can add value to what is already a great foundation."

One of the challenges we all now face is to ... increase our supporter base

After winning back-to-back promotions, Low says the West Sussex club must be "realistic" about the future.

"Although our fan base has risen more than any other League club in the last two years, our attendances this season have not increased as much as we had projected.

"Gate revenue remains one of our biggest sources of income. One of the challenges we all now face is to establish an even higher level of community engagement and increase our supporter base.

"It is going to be very difficult to maintain the progress of the last two seasons on average gates of 3,400.

"We may have to consolidate at this level for a couple of seasons, make the infrastructure even better and give ourselves solid foundations from which to move forward."

Williams announced his decision to stand down last month and was due to continue in the role until the end of the season but he has decided to hand over responsibilities with immediate effect.