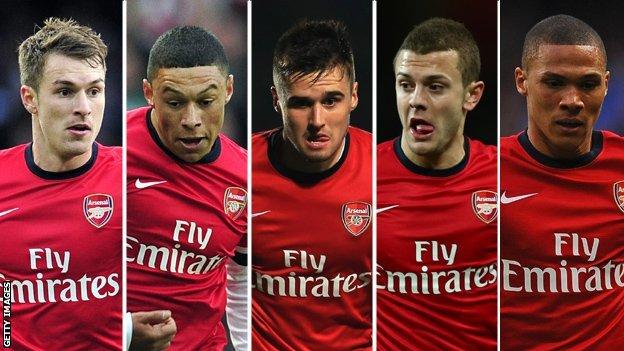 Midfielder Wilshere, 20, who returned in October after 15 months out injured, has signed until 2018.

The other four players have committed to between four and five further years.

"I believe when you have a core of British players, it's always easier to keep them together," Arsenal manager Arsene Wenger said.

"We are delighted that these five young players have all signed new long-term contracts.

"The plan is to build a team around a strong basis of young players in order to get them to develop their talent at the club."

Wenger is hopeful that Theo Walcott will also commit his future to the club.

The England international's contract expires in June 2013. Chelsea, Liverpool and both Manchester clubs have been linked with moves.

Wilshere has made over 70 appearances for Arsenal since his first-team debut in 2008.

He developed into a key player for the club in the 2010-11 season but missed the whole of the last campaign with a knee injury.

Wilshere has played 10 games for Arsenal since returning in October,

Wales international midfielder Ramsey, 21, has made over 120 appearances, scoring 10 goals, while defender Gibbs, 23, has started almost 40 games for Wenger's side.

Winger Oxlade-Chamberlain, 19, joined Arsenal from Southampton in a £15m deal in August 2011 and has featured regularly this season, while defender Jenkinson, 20, has made 10 Premier League starts.

Wenger added: "Jack [Wilshere] is certainly the best known, the leader of this group - but the other four players are exceptional footballers and we're very happy that we could conclude their new deals at the same time.

"Gibbs, Jenkinson, Oxlade-Chamberlain, Ramsey and Wilshere represent a core of the squad and it's an extension for a long period for all of them."