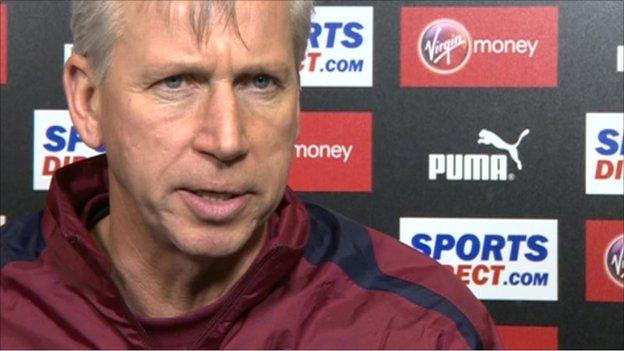 Newcastle United manager Alan Pardew has said there will be no surprises from Europa League opponents Metalist Kharkiv in their last 32 round tie.

The Magpies' reward for progress from the pool stages was a two-legged tie against the Ukrainian side, starting with a home game on 14 February.

"They're one of the powers of the new Europe," Pardew told BBC Newcastle.

Metalist, who were founded in 1925 and are currently part-backed by businessman Oleksandr Yaroslavsky, have been regulars in Europe since the takeover of the club in 2006.

Their last meeting with English opposition came in the 2007-08 season when they were eliminated 4-3 by Everton on aggregate.

"You will be amazed at the information we can gather. We will know them inside out by the time we play them."

He added: "They're a relatively newly created side with finance. It'll be a tough journey and possibly one that is impossible for our fans."

Kharkiv play in the 40,000-capacity Euro 2012 venue Metalist Stadium and are fourth in their domestic league.

In contrast, Newcastle are 15th in the Premier League and on a run of one win in eight league games going into Saturday's match against strugglers Queens Park Rangers.

"It's great we've got this game to look forward to," Pardew added.

"We've got ourselves into a position in the league where we haven't got much to look forward to at the minute, we're fighting for our lives.

"We want to get out of this situation, and that is the cherry on the top of the cake. Hopefully we'll be in a better position when we get to that game than we are now."

Meanwhile Pardew has admitted he is unsure of the future of striker Demba Ba, with the January transfer window set to open.

The 27-year-old Senegal striker escaped punishment for an interview on French TV station Canal+ in which he discussed a clause which would allow him to leave the club if an offer of £7.5m was made and talked of potential interest from Premier League clubs.

"It's unfortunate that the contract he has leaves open a lot of questions because we have this clause and every window that comes around, I have to answer the same questions," Pardew added.

"It would be disappointing for him to leave in this window for this club and for his team-mates here, but the decision will be his, ultimately, because that clause is there.

"The most important thing we have got with Demba is he is a goalscorer."