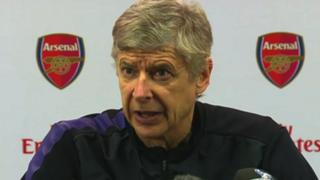 Arsenal manager Arsene Wenger believes the signing of long-term contracts by five players is "good news for the club".

Jack Wilshere will stay at the club until 2018, while Kieran Gibbs, Aaron Ramsey, Alex-Oxlade Chamberlain and Carl Jenkinson have committed to between four and five further years.

Wenger also denies comments made by shareholder Alisher Usmanov that he "doesn't have enough support" from the club's board, saying he has "always" been backed by the owners despite their slow start in the Premier League and a recent quarter-final exit to Bradford City in the League Cup.