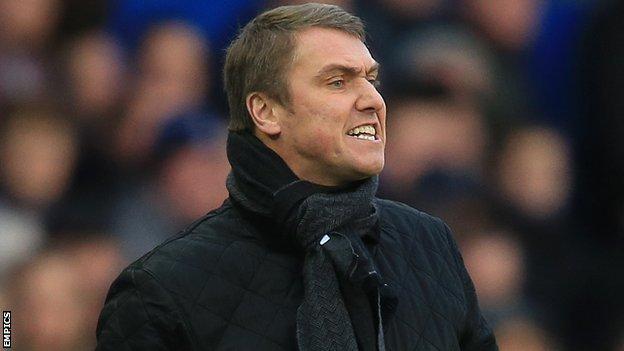 Birmingham City boss Lee Clark joked he will have so many youngsters in his injury-hit squad for Saturday's home game against Burnley that they should be sponsored by a nappy manufacturer.

Ahead of the first of Blues' four-game Christmas schedule, Clark told BBC WM:"I'll have eight teenagers in our 20-man squad on Saturday.

"That shows where we're at. I thought my nappy-changing days were over.

"Our commercial department will have to get us sponsored by a nappy firm."

And Clark, whose plans have been further disrupted by a hamstring injury to full-back Paul Caddis, on top of skipper Stephen Carr's long-term knee injury and an ankle blow to Jonathan Spector, has two more waiting to be brought in.

Will Packwood has already been blooded this season, while fellow defender Emmitt Delfouneso - younger brother of Aston Villa striker Nathan - is the latest to be involved in first team.

"He's a young centre-half who we've got high hopes for," said Clark.

"I don't like to use excuses but the facts are that we are having to make a lot of substitutions because of injuries and those injuries are happening to defenders.

"We just seem to keep getting battered in those areas and it's carried on throughout the course of the season.

"Paul's was the second or third soft tissue injury we've had this season. But it's not as bad as we thought it might be. He's probably three weeks, so we could have him back for Cardiff on 1 January, which would be great news.

"And we still hope Jonathan is back for the festive period."

With Clark already using his maximum-permitted five loan players in an 18-man match-day squad, the Blues boss has been forced to turn to his youngsters, Reilly being the latest.

"The young pups did not let me down last week," said Clark. "You could see what Callum Reilly was about from the first whistle.

"They've got the ability but they've also got the drive, ambition and rapport with the fans.

"It's important to interact with the supporters. That's one of the things I most enjoyed as a player."