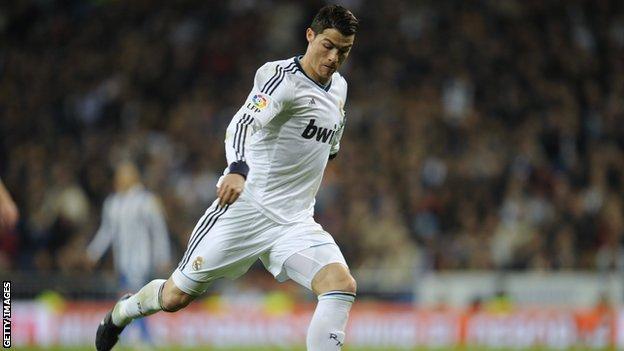 Sir Alex Ferguson admitted his annual "Christmas wish" was to see Cristiano Ronaldo return to Old Trafford - the draw for the last 16 of the Champions League delivered the gift.

Sadly for Ferguson, he will not return to Manchester United as an addition to his own attacking "Galacticos" but as Real Madrid's biggest threat to the Scot's hopes of claiming the trophy for the third time.

Ferguson recently joked that re-signing Ronaldo, who left United for Real Madrid in an £80m deal in 2009 was: "A Christmas wish. We have them every year."

Now he will have to settle for the challenging alternative of finding a way of stopping the brilliant Portuguese, who illuminated Old Trafford in a six-year spell which brought 118 goals in 292 appearances.

The latest meeting of United and Real was the stand-out tie from the draw for the knockout phase for the Champions League in Nyon, a tie nourished by glamour, history and a real hint of danger for managers Ferguson and his old adversary Jose Mourinho.

It will not simply be the latest instalment of Ferguson v Mourinho - it will be Ronaldo against Wayne Rooney and Robin van Persie and two stellar attacking forces against two defences that have proved vulnerable.

Champions League round of 16

Ferguson and Mourinho - who came to greater prominence with his famous surge down the Old Trafford touchline when Porto beat United in the Champions League in 2004 on the way to winning the trophy - will both relish the worldwide profile of this game but surely both might have preferred to leave their meeting until a little later in the tournament. It was a tie they both wanted but maybe not just yet.

The draw also threw up tough assignments for the remaining British sides Arsenal and Celtic, with the Gunners drawing last season's beaten finalists - and this year's symbol of the Bundesliga's ominous power alongside Borussia Dortmund and Schalke 04 - Bayern Munich,

Celtic have been paired with Chelsea's conquerors from the group stage Juventus, but those of us who foolishly wrote off Neil Lennon's side when the group draw was made will not be burned again. The win against Barcelona at Celtic Park simply confirms they will fear no-one.

United's visit to The Bernabeu and the return at Old Trafford will conjure up a myriad of memories. And those seeking omens, even at this relatively early stage of the competition, will recall United overcoming Real in the semi-final on the way to winning their first European Cup in 1968 at Wembley, where this season's final will be played.

Both managers will attempt to solve similar problems before they meet. Ferguson and Mourinho can call on an array of goalscorers but will be concerned about conceding too many at the other end. Mistakes can prove fatal after the group stages.

Real beat Manchester City 3-2 in Madrid in the group stage but were losing until the closing stages while Roberto Mancini's side posed problems to get a 1-1 draw once they had survived an early siege at Etihad Stadium.

This will give genuine encouragement to United but Ferguson will be equally aware the carelessness they have shown at the back this season will invite destruction at the hands of Ronaldo, Karim Benzema, Gonzalo Higuain and Angel di Maria.

United will also be pleased that their status as group winners means they will have home advantage for the second leg - a benefit not to be under-estimated.

Once Arsenal finished second in their group they ran the real risk of drawing one of Europe's big hitters. And so it proved as they landed Bayern Munich.

Bayern kept faith with coach Jupp Heynckes after losing to Chelsea on home territory at the Allianz Arena in last season's final and added further quality to a side already containing world class such as Franck Ribery and Bastian Schweinsteiger.

Javi Martinez is an outstanding Spanish midfield operator who arrived from Athletic Bilbao in a deal worth more than £31m while the highly-coveted Xherdan Shaqiri came from Basel.

They currently lead the Bundesliga by nine points and have realistic ambitions of claiming the crown lost in such agonising circumstances last May.

This is one of the toughest tests Arsenal could have been assigned and manager Arsene Wenger will know they cannot display any of the frailties of this season if they are to survive two legs successfully against a genuine European superpower.

Celtic, meanwhile, will gear up for another emotional night in Glasgow against Juve. Some may regard this as bonus territory for Celtic after coming through such a tough group - but manager Lennon and his players have got the taste for the Champions League and confidence will be high.

Other stand-out ties include Shakhtar Donetsk against Borussia Dortmund, two sides of real capability who can correctly be regarded as dark horses. They have shown enough quality against Premier League opposition Chelsea and Manchester City for future opponents to be warned.

Barcelona will want the Champions League back at the Nou Camp and there is plenty of glamour around their meeting with AC Milan - but it is a tie they will be confident of winning.

In the Europa League Liverpool have been given a very hazardous assignment against Zenit St Petersburg while Tottenham's summer signing Hugo Lloris has a swift reunion with former club Lyon.

Liverpool manager Brendan Rodgers will believe they have got the rough end of the draw and Newcastle counterpart Alan Pardew may feel little better about playing Ukraine's Metalist Kharkiv, so powerful at home.

Meanwhile Chelsea's descent from Champions League holders into the Europa League has been rewarded with a tie against Sparta Prague as interim manager Rafael Benitez attempts to plot a route to another European trophy.