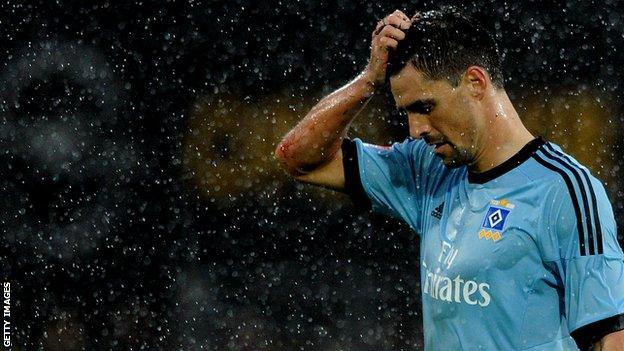 Another Christmas draws closer and, as always at this time of year, Premier League clubs are braced for a frenzied and potentially season-defining period of five games in 15 days.

In any Premier League dressing room, the winter break is always a talking point

A campaign can crumble; the FA Cup's third round must be tackled.

Elsewhere in Europe, footballers in other top leagues - such as Spain, Italy, Germany, France - are putting their feet up for a winter break.

One of them is Paul Scharner, who spent six seasons with Wigan and West Brom. He now plays for Hamburg (whose last match was on 15 December 2012, and whose next match is on 20 January, 2013).

But with no prominent views being aired by current Premier League players, and the position of the Premier League, the Football League and the FA still rather unclear, Scharner tells BBC Sport how his former colleagues and rivals might be feeling at the moment.

The wisdom of a winter break

"Christmas in England is the toughest time.

"It's very hard to recover for the rest of the season. After a long season without a break, it's also a big question of your mental strength. That's the to recharge the batteries.

"In any Premier League dressing room the winter break is always a talking point, because they see the Italian and Spanish leagues - and all the others - who can rest.

"I think 80-85% of current Premier League players support a winter break. It's just for money reasons [that it doesn't have one].

"It would be a very good idea for England because the league would be more competitive. Without a break, it's just an advantage for the big teams with big squads. For the smaller teams with lesser players, they start to struggle in the second half of the season. You can see after Christmas that the league splits a little bit.

"Elsewhere, everybody has a break and can recover and start afresh for the second half of the season. Mentally, this is a big recovery point.

"Also, if you are very Catholic or very religious, then you want to enjoy Christmas time with your family - that is also a big point for a lot of players in Europe.

"Five games in a couple of weeks [as in England] is immense, especially for your body's energy levels. The quality of football drops in this period because everybody is struggling to keep proper fitness.

"[But in a way] it's not about fitness, though, because the body is totally empty. It's about 'how much willpower do you have to perform twice within a 48-hour period?' This, however, is definitely not enough time to recover - specialists generally think that high-performance sportsmen need at least 72 hours to recover.

*The above applies to league fixtures (some Portuguese sides play in Taca da Liga cup over New Year period; some German clubs play in DFB Pokal cup competition during the break)

"You also have to consider the surfaces, which are difficult to play on. And for the fans, it must be tough to sit in the stands in sub-zero temperatures. You could use two weeks in summer and start the season earlier, and enjoy football in the sunshine.

"A winter break would help English club sides to be more competitive in European competition, and it would really help the English national team.

"This winter break is good for me [and others who've been injured]. I damaged my ligaments early in the season and was out for six weeks. From January I can start again and try to get my place in the team.

"That would be more difficult in England because the season would be ongoing - it's better just to start with [what is essentially another] pre-season camp and then be fully ready. We are going out to Abu Dhabi in early January to play two or three friendlies out there. You need a bit of refreshing and to relax, and you do get a bit of energy back from the sun.

"Before that? Well, I haven't had a chance to spend Christmas with my family in Austria for six years - so that's what I will do this year. Hamburg players have got 10 days off, which I am very happy about!"